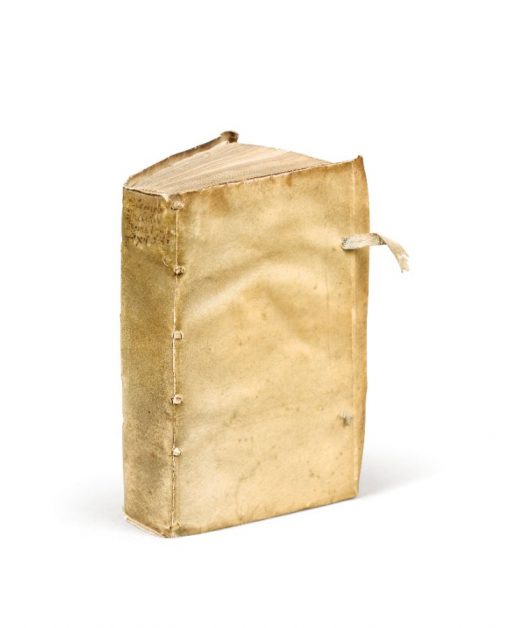 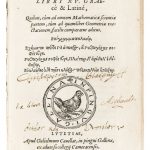 The Eléments of Euclid’s geometry,
“the most important treaty on geometry of all times”
(Dictionnaire des Œuvres).

Important reunion of the first edition of
the Eléments by Euclid given by Cavellat
and of the rare philosophical text by Fox Morcillo.

A very attractive copy
preserved in its contemporary overlapping vellum.

First edition given by Cavellat of Euclid’s Eléments.

Here in its second issue, with the title dated in 1558. It is based on the text established by Jean Magnien and Stephanus Gracilis and is abundantly illustrated with woodcuts of geometrical figures in the text.

This is one of the more idiosyncratic sixteenth century editions of Euclid, with many of the diagrams being embellished with floral devices.

“In the preface, we learn that Jean Magnien, professor at the Collège royal, had vividly insisted upon Cavellat to undertake this edition, but when the bookseller had gathered all the necessary materials, Jean Magnien suddenly died. Cavellat, who didn’t want to see all his expenses go to waste nor disappoint his readers, called on Stephanus Gracilis. The latter reviewed the translation but only got around to doing it for the last six books, the tenth having been entirely translated by Pierre de Montdoré. » (Renouard)

“The most famous source of Greek geometry is the monumental work of Euclid of Alexandria, called the “Elements” (around 300 B.C.). No other book of science had a comparable influence on the intellectual development of mankind. It was a treatise of geometry in thirteen books which included all the fundamental results of scientific geometry up to his time.” (Cornelius Lanzos, “Space through the Ages“)

“Euclid’s Eléments is the most important treaty on geometry of all times. Before Euclid, mathematics were only a branch of philosophy ; here, for the first time, they acquire their independence.” (Dictionnaire des Œuvres)

“The Eléments is made up of 13 books. The first six are dedicated to plane geometry. Books 7, 8 and 9 discuss the properties of rational numbers and the 10th of irrational numbers. The 11th, 12th and 13th elaborate on the measurement of volumes.

The importance of Euclid’s work is such that the study of its tradition is, up until the 18th century, a central part of the study of geometry.

The number of French translations published at the end of the 16th century show the great influence the Eléments had on the development of geometry in France.” (M. Lacoarret, Les traductions françaises des Œuvres d’Euclide, pp. 38-58)

Euclid (365 BCE-300 BCE) founded in Alexandria, during the reign of Ptolemy Ist, a school of geometry, the most important the Greeks had ever known.

“He is, along with Archimedes and Apollonius (who came after him), one of the three greatest mathematicians of Ancient Greece and probably of all times.” (L. Lombardo Radice)

Euclid’s work is followed by the Ethices philosophiae compendium, a very rare text by the Spanish philosopher Sebastian Fox Morcillo of which Palau was unable to see a copy.

The comments and translations of Plato’s dialogues by Sebastian Fox Morcillo (1528-1560), a Spanish humanist and philosopher, are exemplary and played an important part in the history of Spanish ideas in the 16th century.