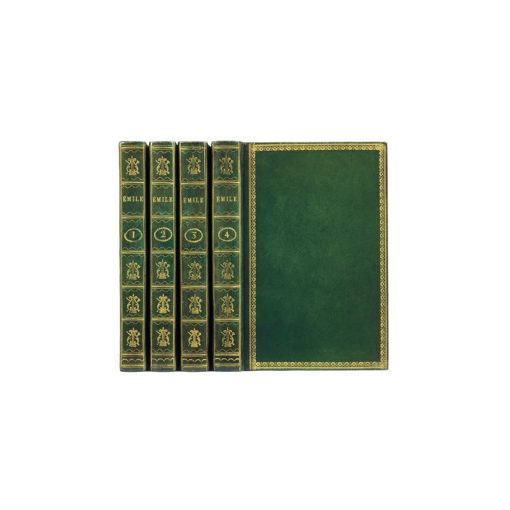 A precious and beautiful copy,
one of the few printed on large Dutch paper in 8vo format,
preserved in its attractive contemporary green morocco.

A precious copy of L’Emile, one of the few printed on large paper in 8vo format, and decorated with 8 figures by Moreau.

The edition of “one of Rousseau’s masterpieces against which the critics were most vehement and the one text that experienced the most tribulations”. (Quérard)

It is decorated with 8 beautiful engravings by Delvaux based on Moreau.

“Very rare copy on large paper of the Cazin edition decorated with 8 nice figures by Moreau le jeune, admirably well engraved reductions of beautiful subjects by Moreau in 4to. This edition, one of the most beautiful given by the editor from Reims, is very sought-after by amateurs.” (Morgand et Fatout)

The common issue of this edition, in 18mo format, is decorated with reduced figures by Moreau le jeune. (Cohen)

“Moreau le jeune is the artist par excellence of Parisian elegance and royal parties of the second half of the 18th century”, writes the baron Roger Portalis.

Faithful to his principle according to which man is born good and his vices are attributable to the disorganized social state and an intrinsically bad education, Rousseau tried to expose in this text the principles of a natural education.

This “natural education” is, according to Rousseau, not the one based on the rules of society and scholarly traditions, but on the knowledge of the true nature of man.

“The originality and audacity of this book can only be fully measured today because a great part of his ideas are now common practice in education, and his principles are followed everywhere. Suffice is to say that he revolutionized teaching methods by winningly introducing into the field of education the principles of the experimental method. A passionate and eloquent craftsmanship, a direct and lively style, rich in poetical digressions, give this book its vitality.” (Dictionnaire des Œuvres)

“Emile was burned on June 10th 1762 in Paris and on the 19th of the same month in Geneva. Posterity has since recalled this judgement and as of 1762, this work was often reprinted.” (Quérard)

If, on publication, this text was attacked, its true interest lies not in the educational theories but in Rousseau’s attitude towards the revealed religion, in his famous profession of faith of a Savoyard vicar, that proceeded from his skepticism in regards to the dogmas and his passionate impulse towards “natural religion”. From this perspective, this text was explosive.

Moultou feared the reaction of the Genovese pastors but the first one came from Paris: on the 9th of June, after the prosecutor Joly de Fleury’s speech, the Grande chambre of the Parlement ordered the condemnation of L’Emile to the fire and a warrant for the arrest of the author of this “criminal system” was filed.

The dauphin de France himself, a real devout, judged it the “most infernal book ever made”.

The book was also condemned by the Sorbonne.

L’Emile met with much greater success than the Contrat social. As noted by Bernard Manin, l’Emile was re-edited 22 times before 1789.

“L’Emile is an educational treaty that contains the principles or rules of a political treaty. Emile, is a citizen of the Cité du Contrat social.

We can measure the influence that L’Emile had on the revolutionary generation because the book is mentioned in all pre-revolutionary debates. From the Constituante to the Convention, all unanimously agree with Rousseau’s ideas. The Citizen is all the more present in public debates, which showed that the author of L’Emile, who was becoming more and more the object of a cult, was being used for political purposes.” (R. Thiéry, Rousseau, l’Emile et la Révolution)

Despite the numerous criticisms and condemnations, the book will make its own way and Rousseau will appear, during the Revolution, as having created a new type of man.

A beautiful and precious copy from the deluxe issue on large Dutch paper and bound in contemporary green morocco.