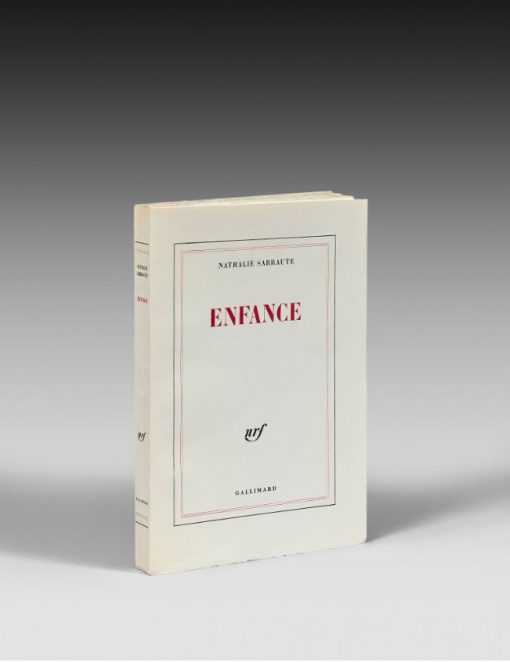 A very beautiful copy from the leading copies,
preserved in its wrappers, uncut, as issued.

One of 37 copies on d’Arches wove paper, only large paper. It bears the n°16.

“Sarraute’s masterpiece is also a poetic artform. It is unique. It is a purification or, better yet, a distillation in the alchemical sense of the word, of her previous writings. Mobile, honest and poetic, deprived of any pathos, this text allows the reader to absorb and savor the words/objets/sensations that make up the author’s memories, and even more powerfully so because through her sufferings, Sarraute has become more human. We sense the blood heating up her veins in Enfance, never openly but always in nuanced and profound ways, as it is the result of an experience truly lived and not an intellectual construction. Sarraute the alchemist has created her own philosopher’s stone.” (Bettina Liebowitz Knapp)

Enfance is an autobiographical novel by Nathalie Sarraute, relating her first twelve years.

The author enters in a dialogue with herself, in search of forgotten memories. The narrator and her double try to write an autobiography in the most objective way possible. The author, a child, is torn between two countries, France and Russia, and between her divorced parents.

Her mother lives with Kolia, and her father with Vera. From Moscow, Natalya makes the trip to Paris with her mother. Then her mother decides to return to Russia, leaving Natalya with her father, who settled in France for political reasons.

The child feels abandoned by cannot say so, for fear of her own words: to say something is to give it life. She wants to give life to a loving mother, as are all mothers. She has a tender and complicit relationship with her father but the things left unsaid too often serve as a language between them. Her father, since his remarriage, forbids himself from getting too close to his daughter. Natalya seems to understand and manages to feel, beyond the words, her father’s love. She must find her place in this blended family; between her father, he stepmother and her half-sister Hélène.

Nathalie Sarraute builds a narrative on fragments of her memory, of images and situations which had a profound impact on her. It is not an exhaustive account of her childhood.

All through the text, the narrator is called on by her double who warns her against her novelistic tendencies.

One of the most interesting aspects of this novel is the narrator’s double personality.

Two “voices” converse, both representing the author, but they represent different attitudes in regards to memory and the way it works. One of the voices takes charge of the narrative, the other represents its critical conscience. Depending on the situation, the second voice slows down the first one’s impulses, warns her against the risks of forcing an interpretation or, on the contrary, pushes her to go deeper. With this two-voice system, we end up with two books in one: on the one hand, an account of childhood and, on the other, a testimony of the author’s investigative process of the past, built so as to avoid the traditional traps of writing an autobiography.

A very beautiful copy, from the leading copies, preserved in its wrappers, uncut, as issued.