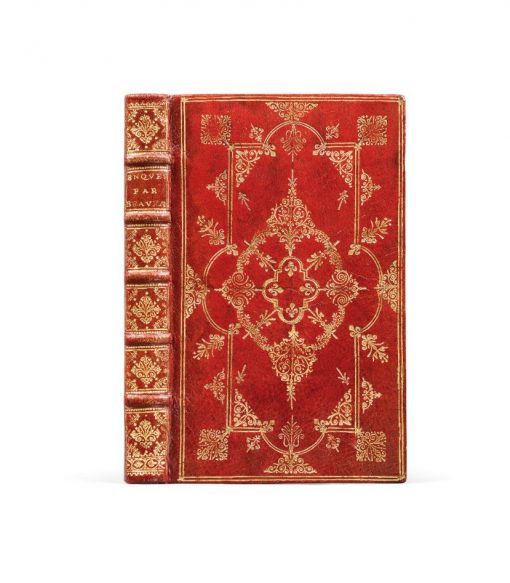 No copy has been recorded on the market since the beginning
of the surveys, more than 35 years ago.

Superb copy preserved in its « archaic-style » binding
in morocco by Luc-Antoine Boyet.

Rare first edition cited by Brunet of the factum written by Thomas Beauxamis following the saint Barthélémy which took place on the 23rd and 24th of August 1572.

Thomas Beauxamis (1524-1589) was a theologian and a predicator, a scholar from the order of the Carmes, and a fervent adversary of Protestantism. He was removed from his office as parish priest of Saint-Paul in Paris because he refused to bury Maugiron and a few others of Henri III’s mignons.

These bindings, which were in fashion in the 1640’s, were made around 1700 for a group of admirers, amongst which were Duvivier, Le Riche and La Vieuville.

The present binding is related to the group 3 exhibited at the Musée Condé in Chantilly in 2002, bindings “Louis XIII et Anne d’Autriche sans chiffre”, and is in all ways identical (except for use of the P palette on the spine) to the binding reproduced (n°30) for a book by Nicolas Sanders in 1587.

Between around 1690 and 1710, a small number of cultivated and mundane book amateurs proceed to have some privileged books covered over with bindings decorated or inspired or seemingly recalling decorations from bindings of the first 17th century.

“These connoisseurs’ collections resemble the model of the curious cabinets of Du Fay or Hoym. Like them, and maybe even more so, they are very selective as to the texts they choose and, like them, very demanding as to the quality of the bindings. They belong to a new movement of aristocratic luxury but, at the same time, they take a very surprising side-step in regards to the texts and the bindings. For the texts, they limit themselves to national medieval and 16th century literature, maybe some 17th century ; basically, everything that the counter-reform and the Gallic humanism had rejected. As to the bibliophilic treatment of the copies, they are very demanding, but still that would not be enough to distinguish them from other cabinets created at the same time (Longepierre…) were it not for their incredible, and heretofore ignored, will to adopt very archaic backdrops testifying of nostalgias or devotions which need to be questioned” (Jean Viardot).