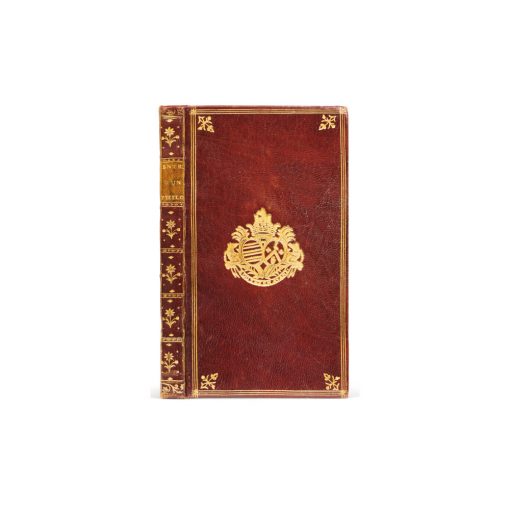 First edition of a sought-after text by Malebranche,
bound in contemporary morocco with the arms of the comtesse du Barry.

From the library of the baron Double, with ex-libris.

First edition of this text by Nicolas Malebranche (1638-1715) “a condemnation of Confucius because of his numerous associations with Spinoza’s impieties”.

Father Malebranche’s philosophy had penetrated China where it was said to be of taste. M. de Lionne, bishop of Rosalie, an apostolic curate in that country, convinced him of writing these Entretiens d’un philosophe chrétien et d’un philosophe chinois sur l’existence de Dieu. The journalists from Trévoux, shocked to find that the author thought all Chinese to be atheists, berated him for choosing to defend Spinoza through his system of the intelligible expanse in God. In his response, which he had printed with their criticism, he justified his accusation of atheism on the Chinese by quoting missionaries, and he gave new strength to his defense of the existence of God; that did not stop father Tournemine, the author of the articles in the newspaper, to renew his accusation of Spinozism in the preface to Fénélon’s Traité de l’existence de Dieu that he was charged with printing in 1713 ; nor Father  Hardouin of putting him on the side of the atheists and backing up this assertion with 60 pages of writing. Malebranche was destined to defend his systems by force his whole life.

The publication of this text drew the ire of the Jesuits, who were closely linked to China, who accused him of turning the Chinese into atheists. These attacks motivated Malebranche, who published his responses that same year in his Avis touchant l’entretien, which is included after.

Marie-Jeanne Bécu (1743-1793) was married on the 1st September 1768 to Guillaume, comte du Barry, in order to be presented to court (22 Avril 1769) and become Louis XV’s favorite. Her beauty immediately enthralled the king and her powerful influence lasted without interruption up until the king’s death. Exiled by Louis XVI, as soon as he was crowned (May 1774), at the abbey of the Pont-aux-Dames, near Meaux, and later in the castle of Louveciennes, the comtesse Du Barry was accused during the Revolution of conspiring with the counter-revolutionaries and died on the scaffold on December 8th, 1793. (O. Hermal, pl. 657, fer n° 1)

Provenance : Comtesse du Barry and Baron Léopold Double, with ex-libris (the book does not appear in the 1863 catalogue).