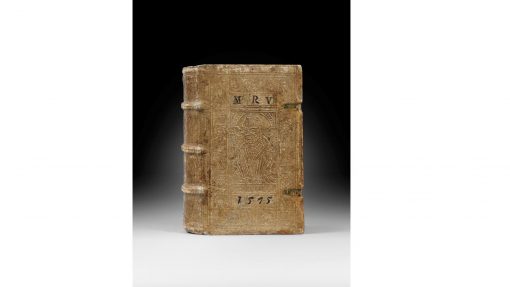 Princeps edition of the first collection of Mélanchton’s Lettres

“of the utmost importance in the history of the Reform” (A. James).

A remarkable copy in contemporary binding with Mélanchton’s portrait.

Pigskin blind-stamped on wooden boards decorated on the upper cover with a plate representing Mélanchton. Initials of the first owner M R V and date : 1575.
A remarkable contemporary binding with the author’s portrait.

First edition of this extensive collection of letters by the humanist and reformer Philippus Melanchthon (1497-1560) addressed to famous contemporaries like Erasmus, Pico della Mirandola, Charles V, Luther, and edited by the physician Peucer (1525-1602), Melanchthon’s son-in-law and one of the leading reformers after his death.

The dedication letter is to Georges Frederick of Brandebourg. Both parts of this copy were abundantly commented on by a humanist, probably the one who had his initials “M R V” apposed in 1575 and who composed the table of contents on three bound leaves at the beginning of the book. Mélanchton’s correspondence makes up a huge ensemble of which these two volumes are the first tentative edition. This collection is of the utmost importance for the history of the Reform.

Follwing Erasmus, Mélanchton aspired to an internal renewal of Christianity through humanism. The conflicts in Tubingen between the scholastics and humanists pushed him, in 1513, guided by Reuchlin, to refuse all offers made by Ingolstadt and Leipzig, and to accept a Chair of Greek studies in Wittenberg. His move to this city had for him some unpredictable consequences: swept up by Luther’s powerful personality, Mélanchton, an Erasmian reformist, becomes a reformer, dedicates himself to the study of the Holy Scriptures, assists Luther at the symposium in Leipzig (1519), and publishes, at age 24 (1521), the first systematic exposé of the ideas of the Reform, La Somme de théologie ou Lieux communs, later reviewed; he takes over for Luther during his retreat in the castle of Wartburg and, when he returns, becomes alongside him the most renowned defender of the Reform, softening by his calm nature and well-balanced culture Luther’s impetuousness, excesses and rigidity.

In La Confession d’Augsbourg, written in sight of the diet held in this town, he presents the Lutheran doctrines in a conciliatory and ecumenical way (1530), and he continues to participate in the attempts of reconciliation made by Charles V in Worms and Ratisbonne (1542), which exposes him, after Luther’s death, to violent criticism by his party because of the concessions he made on several issues considered to be “of little interest” during the Leipzig “interim”, in 1548. It is probably due to Erasmus’ influence that he progressively alleviates the Lutheran doctrines of “free will” and “predestination”.

A remarkable copy by a great European humanist from the Renaissance, very similar to the copy mentioned by Brunet (Suppl. I, col. 998) “with a remarkable portrait on the upper cover of the binding dated from 1570”.