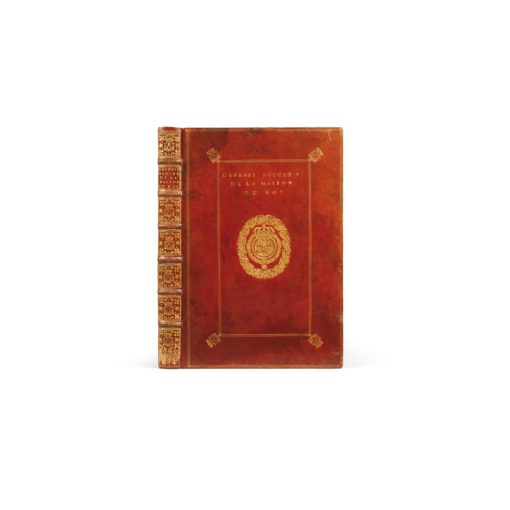 preserved in its contemporary morocco binding with royal arms.

To appreciate the particular interest of this manuscript,
one should remember the absolute exhaustion of the king and State in 1714
and the disastrous consequences on the system it provoked.

Original manuscript detailing with extreme precision the subsistence costs of king Louis XIV and the French court during the years 1707 to 1713, a time marked by the war of succession in Spain that lead to a grave financial and economic crisis.

It constitutes an important testimony to the endless rise of the subsistence costs of king Louis XIV and his court in a time marked by the war of succession in Spain and great economic crises.

The numerous articles and the variety of objects present in this register can be used to appreciate the state of the court of Louis XIV in relation to the luxury and the innate spending that he was reproached of having undertaken.

The reign of Louis XIV is one of the most glorious periods of French history and the pleasures followed the glory in the footsteps of its king.

A culinary revolution began in France during the reign of Louis XIV, looking to soften the rough taste of all foods. A simpler way of cooking was adopted, that highlighted the product in its entirety.

The table becomes the culminating point of the French monarchic ritual so much so that it seems to blend with it and appear to be the ultimate expression of supreme power.

French cooks and maitre d’s are now present in European culinary services. It is in France that culinary trends are made and unmade.

French cuisine undergoes a real revolution in the 17th century and becomes the cultural norm for the tables of all European sovereigns.

Under Louis XIV, the rise of sumptuous ceremonies force the curial services to strengthen the means at the disposal of the kitchens : (extracts from the manuscript)

The charge of Grand maître de France, one of the most prestigious, was traditionally in the hands of the Condés. The great master settled every year the subsistence costs of the House of the King. Under his authority and in his presence were registered and validated the daily expenses.

The first maître d’hôtel, with the assistance of an ordinary master and twelve masters, commanded the Seven offices.

There is the “gobelet”, dedicated to all matters of drink, the “cuisine-bouche” where the meals are prepared, the “paneterie” for the bread, the tableware and the linen, l’“échansonnerie” in charge of wines, the “cuisine-commun”, the “fruiterie” and the “fourrière” where the wood is stored. The books are managed by the contrôleurs généraux, who are themselves assisted by the contrôleurs d’offices and the maîtres de la Chambre aux deniers.

Most French aristocratic houses set up a similar service, of a lesser scale but just as efficient.

Le service de bouche de la maison du Roi is an essential tool in the affirmation of his majesty’s power. Because of the extraordinary expenses that the service implies, the sovereign shows his power and wealth.

The succession of the meals gives a precise rhythm to the king’s day.

Usually, that is outside of military campaigns, the king has two meals. The highlight is supper and before that the breakfast around 9 am.

“The offices had a difficult time provisioning the tables where, because of their commensal privilege, many lords and dignitaries from the court came to eat and drink, at the expense of the king. In Versailles, next to the castle that was not big enough to house all of the offices, Louis XIV had built in their intent the Grand Commun, a vast building where the nobles lived when there was no room in the palace.” (Michel Antoine, Louis XV).

To appreciate the particular interest of this manuscript, one should remember the absolute exhaustion of the king and State in 1714, the ever-growing needs of the treasury and the disastrous consequences on the system it provoked.

Because of the war of succession in Spain and the terrible winter, the year 1709 is marked as being the one where the gap between the revenues of the State and the spending is the biggest in the history of France up to the Revolution. In 1711, the spending surpasses the revenues by 161 900 371 livres tournois. Since 1690 the king spends a lot more than he has.

Nicolas Desmarets, contrôleur général des finances, revokes the decree of Chamillart that hindered the freedom of transaction. In March 1709, he undertakes a complete revision of the money so that the king can perceive a higher seignorage.

From January 1708 to May 1709, the price of wheat is multiplied by six, worsening the famines.

The economic depression that follows the Great Famine of 1709 delivers a terrible blow to the country-sides.

In 1710, Nicolas Desmarets has to organize the raising of a new tax, the “dixième”, which concerned all incomes. That being said, the product of this tax is relatively modest because the incomes have collapsed due to an economic and financial crisis.

In 1715, upon the death of the king, the kingdom’s finances have to be cleansed, and the government looks to the Law system.

It was common practice to feed all of the service officers to the King and the royal family. With time, as shown, this expense had become huge. Necker gave that situation particular attention. He saw that the abuses were greater than the uses ; that the number of officers attached to this part was ridiculous.” (La maison du roi justifiée par un citoyen, 1789).

La Maison Bouche was reformed in 1780.

“It was reproached to the former Maison Bouche its prodigality, uselessness, waste, indecent profusion ; that house, the ideal enemy, no longer exists ; it was tried and lost in 1780.”

This manuscript is a precious testimony of the constant rise of the subsistence costs of Louis XIV and his court between 1707 and 1713 ; one of the causes of the popular discontentment in these times of crisis and famines. The popular disgruntlement in regards to the excessive spending of the king would explode a few decades later and set fire to the French Revolution.

A beautiful and precious copy, preserved in its contemporary red morocco binding with royal arms.