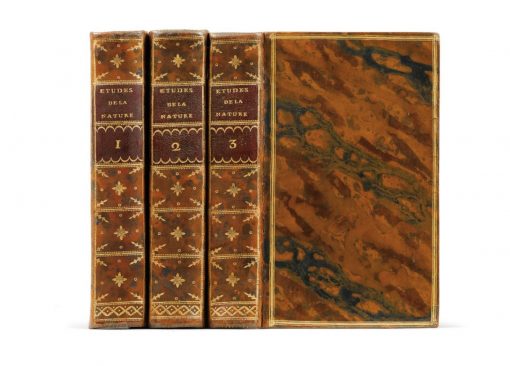 First edition of the “Etudes de La Nature” by Bernardin de Saint-Pierre, “one of the most curious books of the French language” (F. Brunetière).

It is decorated with a frontispiece, bound in the third volume, of a map of the Atlantic hemisphere, and 3 botanical folding plates.

“Les Études de la nature is one of the most curious books of the French language. Its charming style is par to none.

With his idea of Providence, Bernardin de Saint-Pierre, tried, after Voltaire and the Encyclopedia but before Chateaubriand, to reconcile “nature” not with “Christianism”, at least not yet, but with a God whose substance had been greatly pauperized by the century’s philosophy.

“He put the idea of divine personality back into his time period’s way of thinking” (F. Brunetière).

“Les Etudes de La Nature revealed a true talent and genius in Bernardin de Saint-Pierre, which no one would have suspected. It was quite innovative, on a moral and literary perspective, and reminded readers of the principles and eloquence of Rousseau : same independence of opinion, same taste for paradoxes, same strong arguments, same emphatic style” (Michaud).

The publication of the “Etudes de La Nature” brought social recognition to the author.

This ample work is in keeping with the “Encyclopédie”’s perspectives but it stands out because of its spiritualist and providential point of view, its refusal of an analytical approach, and its attention to the harmonic resonances of nature and the human heart, in relation to the “Philosophy of nature” of the first Romantics.

The author believes one should first look for scientific truth “with one’s heart and not one’s mind” and that one should talk about natural history “as a feeling of which the heart is full”. The laws of nature are no longer the laws of astronomers and physicists, like Newton and Nollet ; they are laws of “order, beauty, convenience, harmony, pleasure and happiness.”

He both nourishes and unloads his sensitivity. Like Rousseau, and a few others. And the readers found in him many of the things they had found in the Nouvelle Héloïse, in Gessner or Florian. One must like the countryside and seek what can only be found there, that is “the goods of the heart”.

One must escape the corrupt cities. It is only far from the cities that “one can be recklessly good, true, sincere, learned, patient, temperate, chaste, indulgent, pious.”

Daniel Mornet noted, rightly so, that Bernardin de Saint-Pierre brought a lot to the fundamental description of nature. “It is Bernardin de Saint-Pierre who first quite successfully described the exterior world’s picturesque beauty.” This new way of describing nature and the world will have great influence on French Romantic poets, like, for example, Chateaubriand or Lamartine” (C. Duflo).

This text is apparent to an essay, or a very personal form of literature.

The purely scientific developments alternate with anecdotes, personal souvenirs, lyrical meditations. And everything is loosely organized, inviting all sorts of digressions.

The fourteen studies that make up this book are entirely focused on showing the goodwill of nature, the principles of science and the general physical laws of nature and, finally, the moral laws applied to man taken first as an individual and then as a social being.

It contains many splendid depictions of landscapes, amongst the very first in French literature. They are precise, colorful and filled with a sentiment of panic in the face of nature’s power. While belonging to the “descriptive genre” of the end of the century, they also foreshadow Chateaubriand.

At a crossroad between Rousseau’s philosophy, which inspired him, and the Romantics, who were inspired by him, Bernardin de Saint-Pierre beautifully depicts nature in all its beneficial aspects.

He invents the modern way of describing nature, opening the way for a long line of writers, from Chateaubriand to Saint-John Perse.