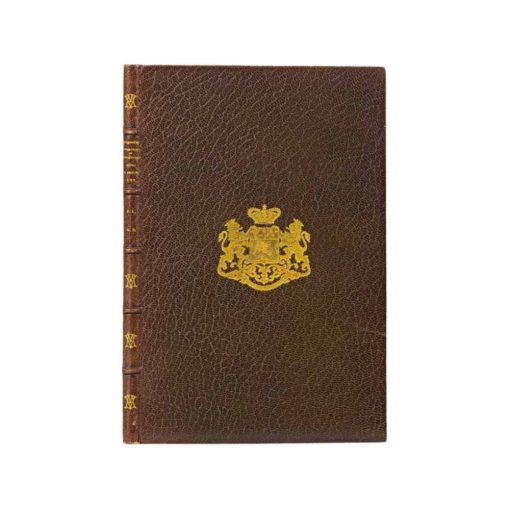 Extremely rare incunabula edition of the commentary
Savonarola wrote in prison while awaiting his execution.

Savonarola greatly influenced Machiavelli,
who was present at the predicator’s execution.

The precious copy belonging to the prince d’Essling, bound with his arms.

Full brown Jansenist morocco, arms stamped in gilt in the center of the covers, ribbed spine decorated with an interwoven cipher in gilt, gilt roll-stamp on the covers, large inner gilt roll-stamp, gilt over marbled edges. Binding signed by Lortic.

Incunabula edition and second edition in Italian of the last text Savonarola wrote in prison while awaiting his execution.

The edition is illustrated with a full-page xylography representing the crucifixion, with Mary, John and Mary-Magdalen kneeling in front of the cross.

At the end of 1495, Savonarola had been forbidden by the pope from preaching: this is why he turned to writing, which allowed him to pursue his propaganda efforts.

The greatest sacred orator that 15th century Italy had known gave his last sermon in San Gemignano in 1485 and took to his pulpit for the last time in Florence on March 18th 1498 to violently denounce the Roman curie and the pope.

The last of the great minds of the Middle-Ages, Savonarole (1452-1498) passionately preached the necessity of a punishment and renewal of the Catholic Church. Tried and condemned, he was burned in 1498.

Very early on, the Protestants considered Savonarola to be a precursor of Luther.

Savonarola was the first to propose a sort of political rationality and will be an influence to Machiavelli.

The latter was present at his execution.

Extremely rare incunabula edition of which Goff only lists 3 copies in American libraries.

A copy with very wide margins (200 mm instead of 189 mm for the copy from the British Museum) bound with the arms of André-Prosper-Victor Masséna, Prince d’Essling, with his motto “Victor et Fidelis”.

Provenance : Libraries of Essling (arms) and Maurice Burrus, with ex-libris.