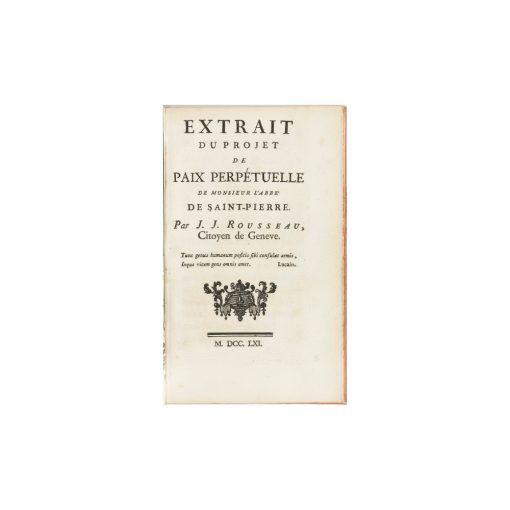 First edition of this essential work by Rousseau
which foreshadows the idea of the League of Nations
and the European union.

A very pure copy, preserved in its old wrappers.

First edition of this essential work by Rousseau which foreshadows the idea of the League of Nations and the European union.

A very complete copy including the frontispiece which is missing in most copies.

“Rousseau published in 1761 a small text under the modest title of “Extrait du projet de paix perpétuelle de M. l’abbé de Saint-Pierre”, but it is marked with the seal of the author’s particular genius, who speculates on the problems of social sciences.

If social institutions had been a work of reason instead of being a work of passion and prejudices, mankind would not have taken this much time to realize that its present organization creates social relations between citizens of the same state while it leaves in their natural state all the other members of the same race.

We have only prevented civil wars by rendering foreign conflicts inevitable.

Without invoking the elements of a superior order like saint Peter did to the sovereigns, such as the love of true glory, humanity and the precepts of religion, Rousseau supposes them gifted with enough judgement and good sense that they can understand that their interests would be better served by submitting their respective demands to an impartial courtroom instead of relying on the uncertain fate of armed warfare.” (Histoire des progrès du droit des gens en Europe, H. Wheaton, pp.196-200)

The literary quality of the Extrait earned Rousseau universal recognition as the greatest defender of perpetual peace.

Despite Voltaire’s criticisms — he had copiously annotated his copy of the Extrait —, and Grimm’s, this text will receive the support of the readers.

It was extremely successful.

A counterfeit was published the year of the first and another edition in Amsterdam by Marc-Michel Rey, also dated from 1761.

The Extrait was translated into English in 1761.

“The publication of this text marks the true beginning of a debate on the idea of perpetual peace and the means to make it happen.” (J. Ferrari)

A very pure copy, preserved in its old wrappers.