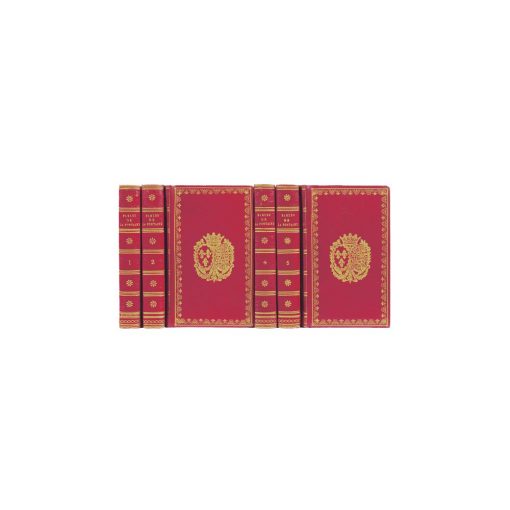 “The copies containing the figures

before the numbers are very sought-after” (Cohen).

On large wove paper
with the 276 figures before the numbers.

The copy of the duchesse de Berry,
bound in contemporary red morocco with her arms.

6 volumes 18mo [136 x 78 mm] ; red long-grained morocco, fillet and frieze in gilt around the covers, arms stamped in gilt in the center, flat spine with floral ornaments and fake fillets in gilt, gilt fillet on leading edges and inside, gilt edges, copy partly uncut. Binding signed by Bozérian the young.

“Beautiful complete edition of the Fables. It includes a frontispiece and 275 figures drawn par Vivier, first painter of S.A.S. Mrg. the Duc de Bourbon and engraved by Simon and Coiny. The frontispiece represents La Fontaine in bust, in the middle of large rocks : five winged Cupids are reading of carrying his books.” (Rochambeau)

“The copies containing the figures before the numbers are very sought-after .” (Tchemerzine)

A copy from the first issue with the figures before the numbers.

The most illustrious book amateurs from the 18th century, like Henri Béraldi or Madame Dornois, looked for such copies before the numbers.

These engravings are printed out of pagination on unnumbered pages, and next to the Fable that they illustrate.

“The artist and engraver Coiny engraved landscapes and then moved on to vignettes ; his most interesting work of the kind is his illustrations for the Œuvres de La Fontaine, printed by Didot (1787), of which he engraved the drawings in collaboration with avec Simon. “Ingenious small figures, in very good taste”, says Renouard.” (R. Portalis)

An exceptional copy, partly uncut, illustrated with 276 figures before the numbers, preserved in its beautiful contemporary red morocco binding with the arms of the duchesse de Berry.

Provenance : Library of the duchesse de Berry (arms) and Brunsee, with ex-libris.

“Marie Caroline Ferdinande Louise de Bourbon Sicile (1798-1870), daughter of Ferdinand Ier, king of the Two Sicilies, and of Marie Clémentine, arch-duchesse of Austria, married Charles Ferdinand d’Artois, duc de Berry, the second son of the future Charles X, who was assassinated on the 13th of February 1820. A widow at 22 years of age, the duchesse dedicated herself to the education of her children. Very brave, she tried to launch a legitimist uprising in Vendée in 1832, which failed. She was betrayed and sent to the citadelle de Blaye. Freed in June 1833, she was isolated by the royal family. She had great artistic taste and had built, in her castle in Rosny, near Mantes, a luxurious book collection remarkable not only because of the editions chosen but also the beauty of the bindings.” (O. Hermal pl. 2554)