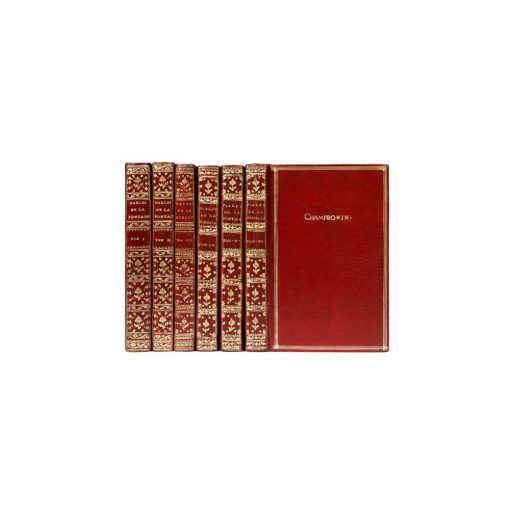 A superb copy of La Fontaine’s Fables engraved by Fessard,
preserved in its attractive contemporary morocco binding
with the supralibros of the seigneur de Champbonin.

Unique copy : 5 very rare plates that were refused,
done by Fessard, were added to this copy,
also enriched with a letter from the artist to the seigneur de Champbonin.

This prestigious edition engraved by Fessard is the most beautiful illustrated edition of the Fables by La Fontaine printed in the 18th century with the one illustrated by Oudry and published 10 years before in folio format.

At the beginning of part II were added 5 plates which were turned down at the time and given to Champbonin by Fessard.

The plates, extremely rare, are unknown to Cohen.

“Sumptuous edition, entirely engraved with large figures, head and tail pieces for each Fable, according to the drawings made by Caresme, Desrais, le  Clerc, Le Prince, Monnet, etc.” (Rahir)

The illustrations include 6 engraved titles, and the title of the first volume is engraved recto-verso, a frontispiece on part I, 243 figures out of pagination, 243 vignettes and 226 tail pieces, made by Bardin, Bidault, Caresme, Dessais, Houel, Kobell, Leclère, Leprince, Loutherbourg, Meyer and Monnet.

The text was entirely engraved by Montulay and Drouet.

“Mister Fessard, engraver to the king, took it upon himself to engrave the Fables by La Fontaine in 6 volumes 8vo. He’s given 5 volumes to the general public, and the sixth will soon be released. It is the custom to present one copy of each volume to the princes and princesses of the Royal Family. He was paid in consequence for his expenses the sum of six hundred pounds from the Royal treasury when each of the 5 volumes were shown.

He begged his Majesty to grant him the same amount of six hundred pounds for the last volume. And Louis XVI was generous enough to accept and to write the word “bon” himself.” (Baron de Portalis)

“The publication of the Fables is a historical moment in the history of the genre. This masterpiece joins the major representatives of French classicism ; it received an immediate, and well-deserved, success.”

A superb copy on Dutch paper, very pure, with wide margins, preserved in its attractive contemporary red morocco binding with a supralibros by Champbonin, enriched with a signed handwritten letter by Fessard and 5 very rare plates that were refused and given to Champbonin by the artist himself.