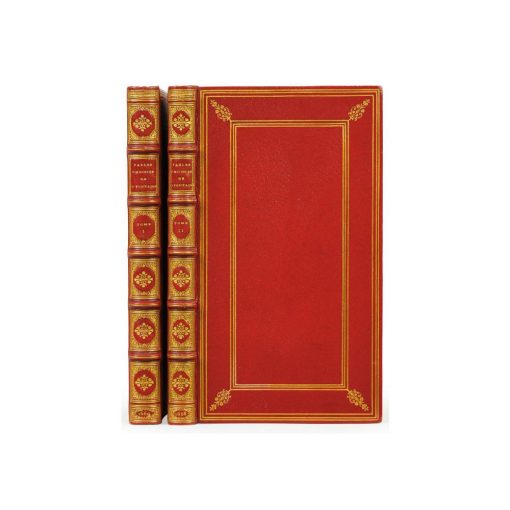 Very rare and definitive first edition
of the Fables by La Fontaine of which part II is missing at the B. n. F.

Part I contains all of the last corrections made by the author.
A superb copy with very wide margins.

Very rare and definitive first edition of the Fables by La Fontaine of which part II is missing at the B. n. F.

Part I includes all of the last corrections by La Fontaine made to the 1668 Denys Thierry edition.

“The first part is the re-print of the 1688 edition with some corrections made by La Fontaine ; part II is missing at the Bibliothèque nationale. The bibliothèque Victor Cousin owns a part II (14346) that is none other than the one from 1688 and bearing the date of 1668.” (Rochambeau)

The present copy is consistent with the copy at Victor Cousin mentioned by Rochambeau.

“The title of part I is decorated with the same floral ornament with the arms of the Dauphin that decorate the title of the 4to, but smaller. The ending of fable I of book IV is the same as in the 4to. This edition copies the 4to except for some corrections and changes and makes up the second edition of the Fables. It includes the same engravings in the middle of the pages by Chauveau.” (Tchemerzine)

“The publication of the Fables in 1668 was a historical moment in the history of the genre. This masterpiece joins the major representatives of French classicism ; it received an immediate, and well-deserved, success, as attests, in particular, the fact that in the same year of the 4to edition a 12mo edition was sold, in two volumes and including the vignettes engraved by François Chauveau. Since then the Fables de La Fontaine have been re-published countless times and their popularity has never waned, even to this day.” (Jean-Pierre Collinet, n°105)

“Since the publication of the first six books, in 1668, the “Fables” de La Fontaine have known constant fame. Generations of school children have learned by heart “la Cigale et la Fourmi”, “le Corbeau et le Renard” and many others which are no less vivacious, precise and imaginative. It is even so precise that it borders on perfection, maybe because the story teller creates an impression of familiarity and nonchalance without ever using an unnecessary word. But it is true that this master craftsman of words had a laid-back attitude and only applied himself to his art.

Born in 1621 in Château-Thierry, La Fontaine, who started out as a lawman, was a negligent master of the Eaux et Forêts and badly managed his domain. He achieved a sort of material tranquility only when he was protected and housed — after 1673 — by Mme de La Sablière. However careless he could be in matters of business and love, he was not in matters of friendship. When Fouquet was arrested in 1661, the artists who worked with him all rallied Louis XIV, except La Fontaine – to whom the surintendant had granted a pension for his “Adonis” — who took his defense in his “Ode au roi”, thus closing himself off to the court, and for a long time.”