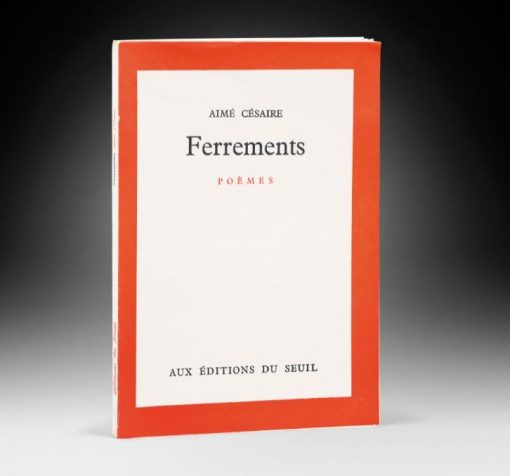 “With Ferrements, Césaire is at the height of his art,

A very beautiful copy, one of 25 from the tirage de tête,
kept in its wrappers, as issued.

One of 25 copies from the leading copies numbered on pur fil (N°VI).

Césaire publishes Ferrements in 1960, year when the decolonization process has succeeded in the independence of some West-African colonies, but hasn’t yet come to an end.

Some poems from the collection echo these events. However, Ferrements stretches over a longer period of time and does not limit itself to contemporary events since it also talks about slavery and the triangular trade.

That this man is politically “active” and that he is an activist of what we have come to call the “négritude” shines a light on these texts in some of their more particular aspects. The events of our time make up a backdrop that helps them resonate.

Most of the poems are about the destruction of an old world, in a fiery whirlwind of images and cataclysms, of volcanic eruptions and all types of catastrophes, and foreshadow the arrival of a new world.

The images conveyed by these poems are strong, full of the vibrant notes of the Antilles, but also dark, because night is ever present. Dark, also, because of the political messages, specters of the worse that humanity is capable of, in itself and against its own — slavery, oppression, injustice.

Césaire doesn’t quit, he never falters : free men are his creed. But he suffers and his poetry is a cry from the heart. The strangest poems found in Ferrements, where the words are overcharged with meaning but never give us a full picture, touch us by their lyricism, their deep rhythms, like a gong, a funeral bell, a drum.

“A writer and politician from Martinique, Aimé Césaire (1913-2008) grew up in a modest home and in 1935 passed the entrance exam to the École normale supérieure. With Léopold Senghor, he theorized the notion of “négritude”. He returned to Martinique in 1939 and founded with his wife the review Tropiques which managed to maintain in Martinique an active cultural resistance. In 1945, Césaire is elected mayor of Fort-de-France and deputy at the French National Assembly. Throughout his life and his work, Aimé Césaire stayed true to the impetus of his youth: ‘To give such a big nigger cry that the instances of the world will be shaken to their core.’” (Jean-Louis Joubert)

A beautiful copy, one of 25 from the leading copies, kept in its wrappers, as issued.