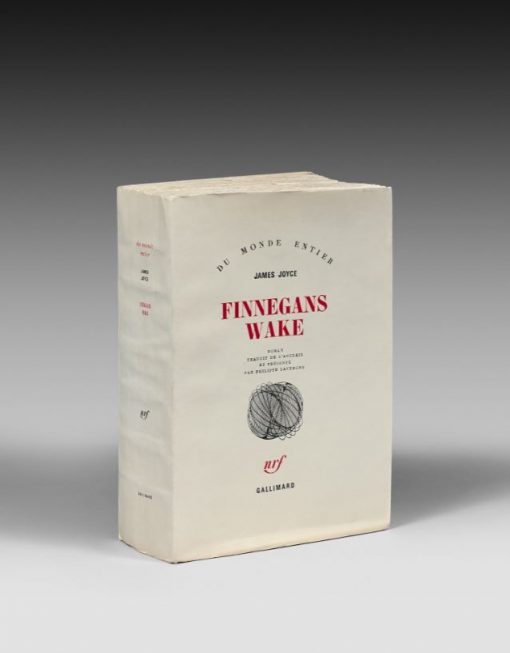 An attractive copy from the leading copies, untrimmed and uncut, very pure,
preserved under its original publisher’s wrappers, as issued.

“The Wake has passages of unearthly beauty (particularly the last page) and huge comic scenes.” (Connolly)

“The first thing to say about Finnegans wake is that it is, in an important sense, unreadable.

In order to pay it the attention it so impertinently and endlessly demands, the reader must forego most of the conventions about reading and about language that constitute him/her as a reader. Joyce’s last great work is an extraordinary performance, a transcription into a miniaturized form of the whole western literary tradition (…) The language of the Wake is a composite of words and syllables combined with such a degree of fertile inventiveness that new sounds and new meanings are constantly ingeminated.”

“Any work by Joyce is so intrinsically linked to the previous one that its own movement inserts itself in the vast rhythm of the whole : Portrait of the artist as a young man was already in Dubliners and Ulysses in Portrait of the Artist ; Finnegans Wake in Ulysses. Ulysses appeared to be a sum : an extreme state of wake, the communion of morning, the weight of noon, the fall and soul-searching of the night. The book ends on the threshold of night. With Finnegans Wake, we cross that threshold. In this, we can say that Finnegans Wake is a complementary book, that closes the circle (…). The language in Finnegans Wake is liquid like the river, its main theme, but, at the same time, it is so profoundly linked to the book’s depths that it is also its rock, its nourishing soil and its sap.” (Dictionnaire des Œuvres)

A precious and appealing copy, untrimmed and uncut, kept as issued, like new, of the author’s defining modernist experiment.