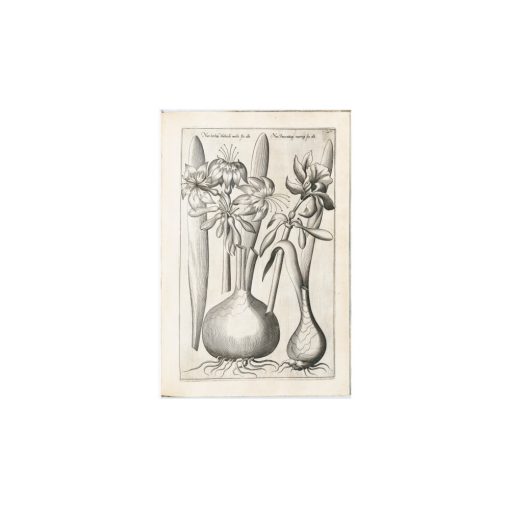 First edition and first issue of Sweert’s Florilegium,
one of the most renowned books on flowers of the early 16th century.

First edition and first issue of one of the most renowned books on flowers of the early 16th century.

Missing from VD-17 and Matagne (Namur).

It presents itself in the form of the oldest printed catalogue on plants compiled by Emmanuel Sweert (1552-1612), one of the great Dutch flower merchants.

Even though this book does not mention the price of flowers, it was used by Sweert as a sales and exhibition catalogue at the Frankfurt fair.

In keeping with the description given by Nissen, it contains 110 plates representing 560 plants and flowers.

The title-frontispiece is decorated with the portraits of Clusius and Dodoens.

Some copies have a portrait of the author out of pagination as mentioned by Hunt.

“The work is a picture book of plants which served as an unpriced catalogue of plants and bulbs for sale at the author’s shop at the Frankfurt Fair and afterwards in Amsterdam.” (Cleveland Collections)

The plates depicting some 560 plants and flowers, are mostly copied from the de Bry florilegium (itself largely based on Vallet).

The work is notable for the many fine plates of tulip varieties. It was one of the most popular of the 17th-century florilegia and went through five subsequent editions.

Emmanuel Sweert was born in Sevenbergen, near Breda, and made a name for himself through his ability to cultivate plants. He became a flower merchant and was appointed head of the gardens of the emperor Rodolphe II.

“Having engraved the most beautiful plants of his collection, he published them under the title “Florilegium amplissimum et selectissimum”, folio, Frankfurt, 1612. It is made up of eighteen printed leaves, including a dedication epistle, a preface and a catalogue in four languages: Latin, Dutch, German and French, 43 plates in the first part, 67 in the second: most are varieties of lilies and some trees. Some are imitated from the gardens of Henri IV by Vallet and Robin. All of these plants are drawn from nature and correctly engraved. A reunion of both parts was printed in Amsterdam in 1647. Other editions are mentioned until 1672. It is because of these representations that Sweert is considered a botanist and that Linné dedicated to his memory, under the name “swertia”, a genus formed by one of the loveliest alpine plant of the gentian family.” (D.P.S.)

A very beautiful copy preserved in its contemporary ivory vellum.