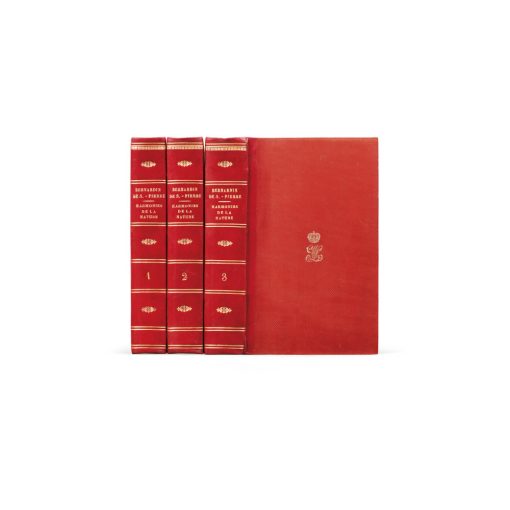 A copy on large paper, untrimmed,
bound for the empress Marie-Louise.

Red half-morocco, crowned cipher in gilt in the center of the covers, flat spine decorated with fleurons and double fillets in gilt. Contemporary binding.

Rare first edition of Bernardin de Saint-Pierre’s work, which foreshadows the “Baudelairian world of the correspondences and universal analogy”.

Published a few months after the author’s death, the Harmonies de la Nature was conceived as the crowning of the Etudes, both a recapitulation of his whole work and the ambitious project of the summing up of knowledge. His enterprise, which evokes the spirit of the Encyclopédie, differentiates itself from it by his refusal of any analytical and descriptive method, instead opting for a synthetic approach that seeks to link all of the elements of nature so as to reveal the harmonic relationships that unite all beings together.

However, there emerges a cosmological vision that some consider delirious but from which a singular poetry emerges.

Jean-Jacques Rousseau’s influence is visible in the text.

Bernardin de Saint-Pierre spent time with the author of the Rêveries du promeneur solitaire with whom he would go out walking in the countryside. They would exchange about the nature of the human soul.

“If he foreshadows the Chateaubriand of the forests and the American cataracts, Bernardin de Saint-Pierre also opens the way to a whole new 19th century poetic tradition. For Lamartine first, who borrows from him the idea and even the term of “harmony”. For the author of the Fleurs du Mal after. The exotic aspects of the wandering Baudelaire, the one from the “Vie antérieure”, are also linked to this intuition of a universal harmony and allegory which the poet drew from Bernardin.” (Guillaume Métayer)

“We owe [Bernardin de Saint-Pierre] for the introduction of many themes of Romantic inspiration. He renews the sentiment of nature, concerning himself with the grandiose and sublime. He is the source of descriptive lyricism from which Chateaubriand, Flaubert, Loti and so many others drew.

He gives our literature a new breath through his highly colorful impressionist palette and his language of naturalistic precision.”

A wide-margined copy, belonging to the 8vo issue of the first edition — rarer and more sought-after than the 12mo issue printed simultaneously —, contemporary bound for the empress Marie-Louise with her crowned cipher in gilt in the center of the covers.

Eldest daughter of François Ier, the emperor of Austria, and Marie-Thérèse-Caroline-Joséphine de Bourbon, the daughter of the king of the Two-Sicilies, Marie-Louise, arch-duchess of Austria (1791-1847), was asked in marriage by Napoléon Ier for reasons of State; she married him on March 11th 1810 ; from their union was born the king of Rome on 20 March 1811. Named regent in 1813, and also in 1814, she received full sovereignty, when Napoleon abdicated in April 1814, of the duchies of Parma, Piacenza and Guastalla and kept her title of Imperial Majesty.