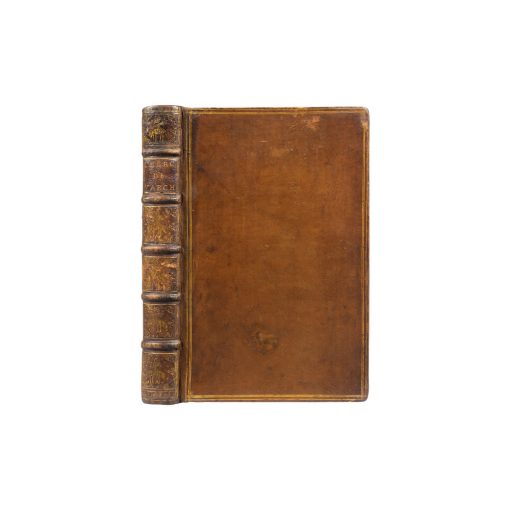 This first edition influenced and inspired Montaigne
when he wrote his first text.

The copy of the poet Philippe Desportes (1546-1606),
containing his double autographed signature,
and of the baron de Longepierre, with his emblem repeated on the spine.

A renowned text that will inspire Montaigne for his Apologie à R. Sebond.

A precious copy that belonged to Philippe Desportes, one of his disciples in France; it is decorated with his autographed signature on the title-page.

In this text, Varchi tries to reunite all of the interrogations and preoccupations of the Italian linguists of his century. He declares himself for the use, and preservation, of the vulgar language and its Tuscan roots, in opposition to the official language, seen as the pure development of classical Latin.

Benedetto Varchi (1502-1565) was born in Florence, and linked to the Strozzi family which participated in the expulsion of the Medici in 1527.

When his texts earned him the reputation of being an elegant and pure writer, Côme Ier, who wanted to encourage literary studies, gave him a pension and facilitated the creation of the Florentine academy; then he asked him to write the history of the last years of the Republic and the origins of the Medici’s power.

With l’Histoire de Florence, l’Ercolano is the most esteemed of Varchi’s texts, who titled it this way in honor of the count César Ercolani of Bologna, one of the persons present in this dialogue.

A precious copy that belonged to Philippe Desportes, one of his disciples in France.

His autographed signature is present at the head and foot of the title.

The libraries of Montaigne and Desportes held an important number of Italian books. The Italian influence is strong at Henri III’s court and on the French poets who rediscover and illustrate neo-Petrarchism.

Under the reign of Henri III, Desportes was considered Ronsard’s equal and was often preferred to him.

Forty years younger than Varchi, Desportes is 24 years old when the Ercolano is published. In 1570, he is barely back from a stay in Italy where he was under the influence of Petrarch. Desportes leads with Ronsard and Du Bellay the Italian-influenced movement and the defense of the free development of languages and dialects; he is directly opposed to Malherbe who, at court, supports a classical and pared-down language. Literary France will side with Malherbe. In the 17th century, some still resist, like Régnier, Théophile de Viau and La Fontaine, amorous of “old words”.

Montaigne owned a copy of the Ercolano from 1570; it will influence his Apologie de R. Sebond and also probably the Essais.

“It is probably during his trip that Montaigne acquired this book, and in any case, he definitely read it between 1580 and 1582. Varchi wrote this text following a debate that had taken place between two scholars of the time, Hannibal Caro and Castel Vetro. He broaches in detail questions regarding language and grammar, which the 16th century loved. Montaigne borrowed 4 elements, all present in the Apologie de R. Sebond. Three of them pertain to the question of speech in animals. Montaigne defended this hypothesis, Varchi, on the contrary, opposed it.” (Les sources et l’évolution des Essais de Montaigne, P. Villey, I, p.234)

Montaigne also inserted in his Essais some quotes directly taken from the Ercolano.

The copy of the poet Philippe Desportes, containing his double autographed signature, and of the baron de Longepierre, with his emblem repeated on the spine.

Hilaire Bernard de Requeleyne, baron de Longepierre (1659-1721) is famous for his love of books. As a child, he distinguished himself so much from his classmates in his classical studies that Baillet placed him in his Enfants célèbres. He composed several tragedies.

This bibliophile still has a very good reputation amongst amateurs. His volumes are bound with taste, often in light-brown calf and all decorated with the Golden Fleece.