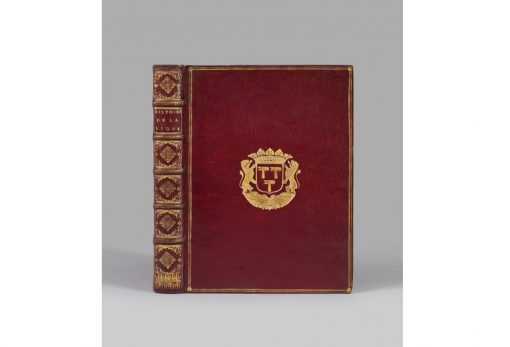 The unique copy of this rare first edition mentioned by Olivier-Hermal
with a replica of the arms.

From the library of the comte René Galard du Béarn with armorial ex-libris.

First a pedagogue and Jesuit predicator, Louis Maimbourg (1610-1686) had to leave his order at the pope’s demand because of his ardent Gallicanism. He then dedicated himself to writing historiographical books and pamphlets relating to the religious polemics of his time.

“His style is neither lacking passion nor geniality: he knew how to make history as interesting as fiction, and he appealed to the more malicious of his readers with his portraits, done in the manner of mademoiselle de Scudéry, where he painted his contemporaries as historic characters who had had similar roles.

Father Maimbourg’s Histoires are too well-known and too often quoted for us not to speak of them in some detail.

The Histoire des croisades was considered to be the best Father Maimbourg ever wrote. The abbot of Choisy recommended reading it.

L’Histoire du calvinisme led to a great number of protests by the Protestant writers Rou, Jurieu, Rocolles, etc. Bayle’s review is one of the most pleasant pieces ever to be created by his quill.

In the Histoire de la ligue, we find some original and quite curious pieces that had never been published before, among which the association pact made by the powerful men of the country against House Bourbon.

Bayle thought Maimbourg had a particular talent for history: “His writing is agreeable, vivacious and he shares numerous incidental instructions. There aren’t many historians who manage to captivate the reader like he does.” Finally, Voltaire, who can not be accused of having been favorable to the Jesuits, said of Maimbourg : “At first, he had too much popularity and then he was too neglected.”

A precious and beautiful copy, preserved in its contemporary armorial binding.

Unique copy mentioned by Olivier-Hermal with a replica of the arms (plate 2074).