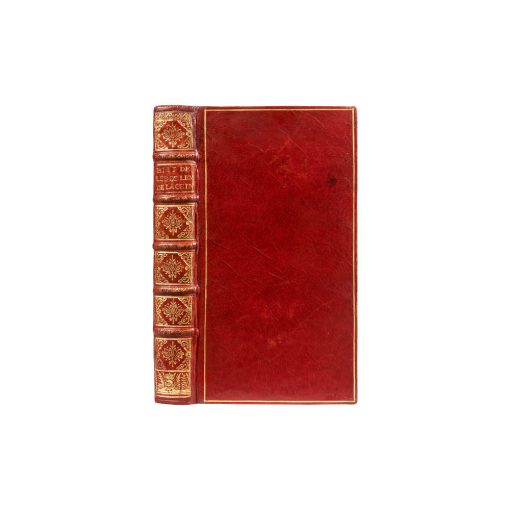 Rare first edition of this interesting description
of China under the reign of king Louis XIV.
(No copy listed in ABPC, Argus.)

A precious copy, preserved in its contemporary red morocco
and decorated with a crowned dolphin on foot of spine.

First edition of this interesting description of China and Chinese habits given by father Le Gobien, a Jesuit missionary in the East under the reign of king Louis XIV.

“The Christian missionaries, who had already been persecuted under Chin-Tsoung, a Ming emperor, in 1615, were persecuted again under the emperor Khang-Hi. One may wonder why, when several religious sects were tolerated by the Chinese government, the Christian religion did not benefit from this same privilege. In all of the edicts banning the Christian religion, the motives given mention the political and, so to speak, facetious character of this religion, and practices that go against Chinese mores, like the gathering of men and women together. We think that it is this latter practice that is the most condemnable in the eyes of the Chinese and could prevent them from ever accepting Christianism. The edicts order that the “strangers” be escorted and return to their country, leaving China at peace. Father Le Gobien has written the story of the negotiations that happened between influential Jesuits in Peking and the Chinese authorities since the first edict and up until this one from 1692.” (Chine, ou description historique…, G. Pauthier)

If the analysis of the Confucian religion and the adventures of the Catholic missionaries dominate the text, father Le Gobien extends his interest to Chinese printing, sino-russian relations, the description of monuments and landscapes and the Chinese passion for “little feet”.

“Father Le Gobien has added to the history of the edicts granted to the Christians of China a description of the honors that the Chinese give to Confucius and their dead. To better make his point across, he starts his explanation further up and remarks that the politeness of the Chinese mostly depends on the exact observation of what they call ceremonies. Their ceremonies not only organize public duties but also extend to the most common actions of civil life. The Inferior knows what he owes his Superior, and the Equal to his Equal.” (Journal des Savants, 1698)

A precious copy, preserved in its attractive contemporary red morocco binding with a crowned dolphin on the foot of the spine.

“This mark showing a dolphin with the crown of the princes de sang is stamped on numerous volumes addressed to the Dauphin, Louis de France, also named the Grand Dauphin (1661-1711) and printed between 1678 and 1706. This stamp was not noticed until today. It is because of the research made by the late J.P.A. Madden that we owe it to be restored to the bibliophilic world (1880).” (Guigard, I, p.50)

“We think that this stamp may have been primitively put on the volumes destined for the Grand Dauphin and that it was later used as a simple ornament on numerous calf or morocco bindings.” (O. Hermal, pl.2522)