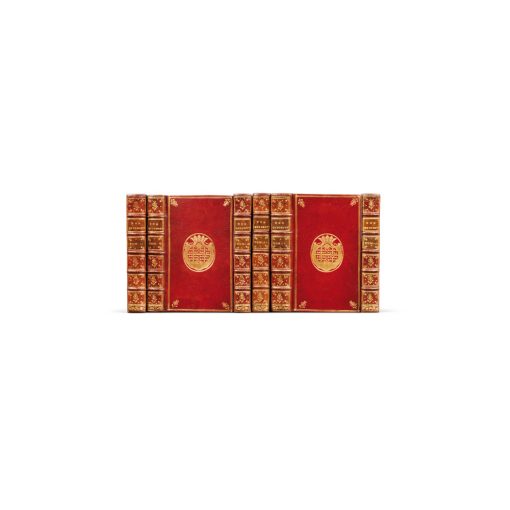 The only copy quoted and described by G. Brunet
bound in contemporary armorial morocco.

A precious copy from the libraries of the
duchesse de Montmorency-Luxembourg and the Baron Double.

The only copy quoted and described by Brunet (supplément, I, 237) in contemporary armorial morocco of this sequel to Don Quixote.

Filed by Deschamps in the Cervantes column but actually maybe translated by Lesage, this “suite nouvelle des avantures de Don Quichotte, suivie de l’histoire de Sancho Pansa” was, in the 19th century, sold for 405 fr. or with the “Don Quixotte” from 1741 and the “Nouvelles Aventures” by Lesage from 1741, these 14 volumes bound in red morocco with the arms of the duchesse de Montmorency-Luxembourg.

Deschamps describes a second copy of these 14 volumes sold 19 fr. or only on the same date. The colossal price difference is due to the prestigious origin of the present copy. These three works are generally sold separately and Deschamps mentions only one copy of these 6 volumes : “The first 6 volumes alone from the translation by De Filleau de Saint-Martin, in old morocco and with the engravings by De Folkema added, 105 fr. Huillard ; they had gone for 125 fr at M. Germeau.”

In 1614, while Cervantes was trying to write the second part of his novel, an apocryphal sequel was published under the title: Second volume of the Ingenious Gentleman Don Quixote de la Mancha [Segundo tomo del ingenioso hidalgo don Quijote de la Mancha]. The author, who hides his identity under the name of the “licenciado” Alonson Fernàndez de Avellaneda de Tordesilla, is said to be one of several different persons, maybe even de Vega, or Ruiz de Alarcon, or Tirso de Molina, etc., but in the end, he remains anonymous. The pseudo-Avellaneda, by pretending to continue the story Cervantes interrupted at the end of the first part of Don Quixote, shows our extravagant knight having recovered all of his intellectual faculties and now living peacefully at home until one day Sancho Pança, by talking to him about a new chivalry novel, manages to reanimate his master’s old habit. Don Quixote, taking up the name of the Loveless Knight, “El caballero desamorado”, leaves off to seek new adventures and finds a long new series of them, very similar to the ones shared in the first part of Cervantes’ real novel. The pseudo-Avellaneda remains faithful to the strange delirium of interpretation of Cervantes’ hero but almost always, the latter’s imagination is replaced by an intelligent and inventive twist in the narrative : the humor often becomes too heavy and grotesque. As we know, this mystification fired up Cervantes’ desire to finish the second part of his masterpiece; it is not the only merit of Avellaneda’s curious attempt, whose book was re-printed several times up to now and was translated, rather freely, by Lesage. The unknown author, who was from Aragon (it is one of the rare things all critics agree on) is certainly not a bad writer. Even if the comparison of the two shows, naturally, Cervantes’ superiority, the apocryphal Don Quixote is a novel of great literary interest; it shows us how a man of talent, following the path of a genius, also manages to shine.”

An old note mentions that this copy apparently belonged to the library of the château de Chantilly : “This charming set was presumably housed at one time in the Château de Chantilly, now (in the rebuilt structure) the home of the great Musée Condé.”

A very beautiful copy decorated with a frontispiece and 33 engravings by Antoine, quoted and described by Deschamps and G. Brunet, and coming from the libraries of the Duchesse de Montmorency-Luxembourg and the baron Double.