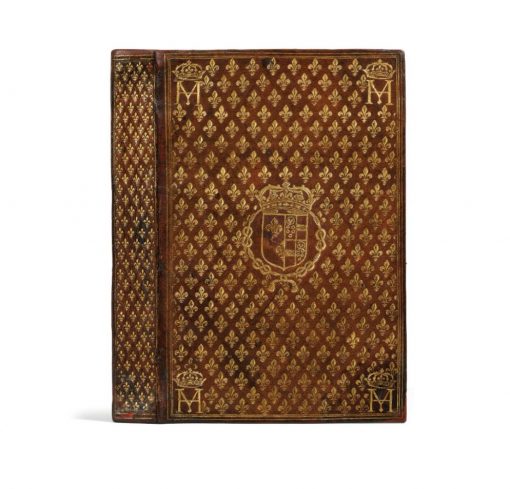 The binding, and it’s quite rare,
bears the interwoven ciphers
of Henri IV and Marie de Medici
repeated 4 times on each cover.

4to [240 x 160 mm], full limp olive morocco, covers and spine entirely decorated with fleur-de-lis, arms of Marie de Medici at the center of the covers, Henri IV’s and the queen’s crowned ciphers repeated 4 times on each cover, gilt edges. Contemporary binding from the workshop of Clovis Ève.

Precious binding from the workshop of Clovis Ève for the queen Marie de Medici with her arms and the widow’s tassel, and the crowned and interwoven cipher of the queen, M, and the king Henri IV, H, who had just been assassinated.

This copy, the second and last volume of the history of the knights of Jerusalem, was one of the masterpieces of the famous catalogue of the library Belin, Paris, 1912, dedicated to « Livres avec Riches Reliures historiques des xviè, xviiè et xviiiè siècles ». Described under n° 18, it then sold for the also considerable price of 4 000 F OR. At the time, bibliophiles could find collector books starting at 10 F OR and the famous Belin catalogue presented exceptional books starting at de 300 F OR.

« Marie de Medici, eldest daughter of Francesco I, great-duke of Tuscany, and of Joanna, archduchess of Austria, was born in Florence on April 26th 1575 ; she became Henri IV’s second wife, whom she married by proxy in Florence on October 5th, 1600, and whom she joined in Lyon on the 9th of December; close to the Spanish party and the Ligue, she reestablished the Jesuits but took care not to meddle in public affairs. Marie de Medici was only crowned queen on 13 May 1610, in Saint‑Denis ; the following day, Henri IV was assassinated and the queen was declared regent the day after, on May 15th.

Like all of the members of her family, Marie de Medici protected artists ; she ordered the construction of the Luxembourg palace and the creation of the cours-la-reine ; she also liked books and literature of which many were bound by the last Ève, by Ruette and by Henri le Duc.

The volume is decorated with a superb engraved title frontispiece.