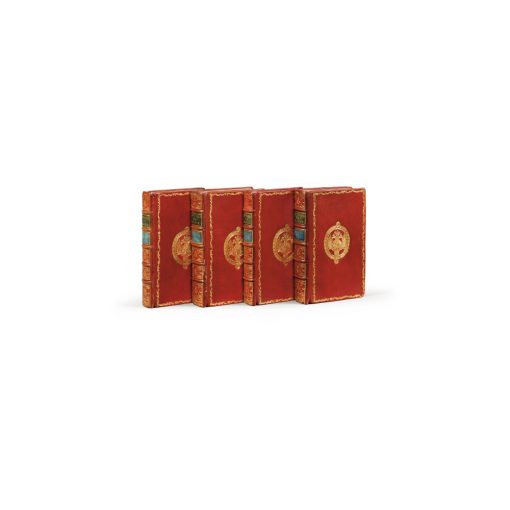 The history of the French revolutions
specially bound for the empress of Russia Marie Feodorovna.

First edition of the Histoire des révolutions de France from the time of Clovis to Louis XIV.

Around 1711, he teaches at the Collège Louis-le-Grand, where he is the study prefect of René Louis d’Argenson and he gains some notoriety with a speech he made in the cathedral of Rouen on the 20th of October 1715 where he attacks the “novateurs” who surround the Regent. Disavowed by his superiors, he is transferred to Hesdin ; there he works for d’Argenson who shares with him the outline and the material for his Histoire du droit public ecclésiastique.

The adventures of La Motte are told by d’Argens. According to him, he squandered an considerable pension and cheated Voltaire out of 1000 francs before fleeing to Constantinople where he made himself into a Turk ; Voltaire seems in agreement with d’Argens in saying that La Motte lived as a “beggar” in Holland.

There, he worked for Rousset and then La Martinière, as an author, copyist and anonymous journalist.

Inspired by the Jesuits for his attacks against the Regent in 1715 but disavowed by them, he stayed close, in Holland, to the Catholic circles. He is considered by Voltaire and d’Argens as an emissary for the Jesuits ; after 1715, he inserts himself in the political circles of the Regence and gives on several occasion an apology of Philippe d’Orléans.

A very beautiful and precious copy specially bound for the empress of Russia Marie Feodorovna.

Born princess Dorothée-Sophie-Augusta of Wurtemberg, niece of Frederick the Great, she married in October 1776 Paul, son of Catherine the Great. He accedes to the throne at his mother’s death, on November 17th, 1796.

His hatred of the French Revolution was such that he forbade the importation of all French books.