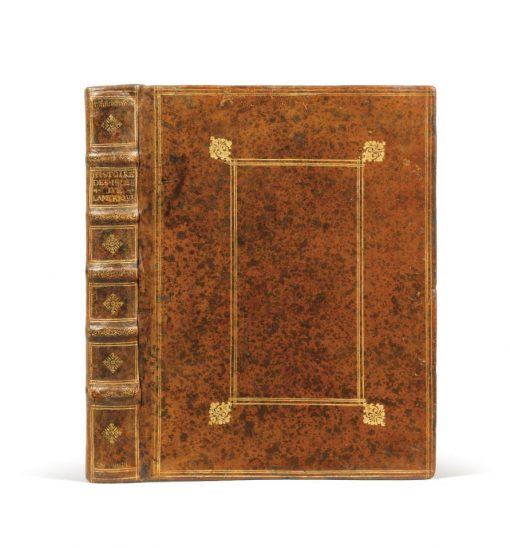 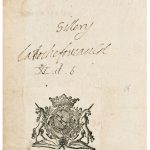 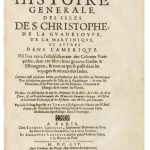 First edition of this first work
dedicated to the Antilles by the father du Tertre.

A beautiful copy, very complete, including the
“3 maps that are often missing” (Leclerc).

The copy of the Duke de La Rochefoucauld (1613-1680),
with his autographed signature.

Granite-patterned calf, double frame of triple gilt fillets with fleurons in the corners on the covers, ribbed spine decorated with double fillets and fleurons in gilt, marbled edges. Contemporary binding.

First edition of the first work dedicated to the Antilles by the father du Tertre.

Dedicated to Achille de Harlay, this edition includes 3 finely engraved maps of the island of Saint-Christophe, of Guadeloupe and Martinique.

The copy of the Duke de La Rochefoucauld, with his autographed signature, and complete with the “3 maps that are often missing”. (Leclerc)

“Du Tertre was born in Calais in 1610. Having always wanted to travel, he boarded a Dutch ship that took him to the Americas several times ; later he served in the army of the prince of Orange. He then gave up his adventurous life and joined the Dominican brothers. His superiors, aware of his experience, sent him to the Antilles, and he later wrote its history.

His book, the fruit of his personal observations, is the most important work to be published on those islands. The writers that came after him attested to its perfect accuracy.” (Picot, 1984)

Du Tertre spent eighteen years in the Antilles, from 1640 to 1658. During that time, he collected numerous facts on the natural history of the islands, the mores of its inhabitants and the establishment of the French colonies from 1625 to 1667.

This work is the first one written by a Frenchman, dealing with the French islands in America. It describes everything which happened in the French settlements in the Antilles from 1625 to 1667. The author spent 18 years as a missionary there, and gives much interesting information on the various plants, animals, minerals, etc. A large section is devoted to the many kinds of trees, which the author divides into wild and fruit-bearing ones. He speaks of at least forty species, among them laurel, cypress, sandalwood, palm, besides many wild unknown ones. He also discusses in detail the tobacco plant, its four different kinds, planting, cultivation, harvest, processing, and manufacture. The volume is illustrated with three beautifully engraved, clear, extremely well-preserved maps, picturing the islands of Saint Christophe, Guadeloupe, and Martinique. At the end of the book is a Carib translation of some of the prayers of the Church, which the missionaries taught to the natives.

“He writes with sufficient detail, but not with exaggeration, and his work has often been used by authors as a source book on natural history.” (Eyries)

The maps not only indicate the maritime passages but also the picturesque and mining resources of the three islands.