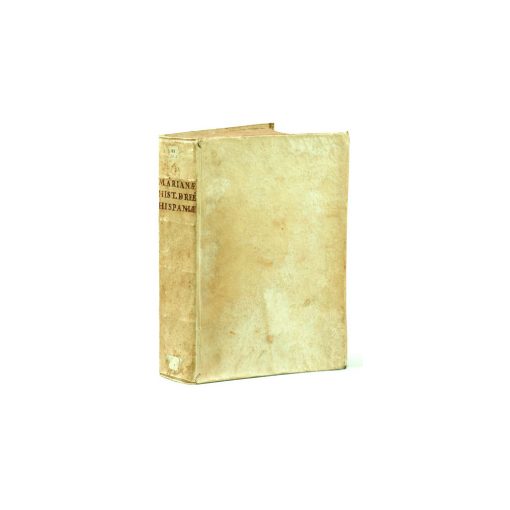 “Very rare first edition” (A. Backer) of this precious and rare Americana (Sabin).

A very beautiful and precious copy, wide-margined,
preserved in its contemporary overlapping vellum.

“Very rare first edition” (A. Backer) of the first History of Spain and the Iberian Peninsula by Juan de Mariana.

“The first and extremely rare edition of this highly esteemed work, which includes some chapters on the West Indies.” (Sabin)

This history is commended because of the intense research that went into it, the accuracy of its facts, the wisdom of its reflections and mostly the geniality of its style, simple and elegant and very similar to Livy’s, whom the author had taken as model.

After studying theology at the University of Alcala de Henares, Juan de Mariana (1535-1624) went on to teach at Jesuit seminaries in Loreto, Sicily and Paris.

Two years after bearing witness to the “miserable spectacle” of the Saint Bartholomew’s Day Massacre, Mariana returned to native Spain.

In 1592, he further enhanced his standing as a man of letters by providing the Spanish and European public with the first history of Spain. Meriting numerous editions and translations, the Historiae de rebus Hispaniae would remain the standard work on Spanish history up to the eighteenth century.

Some countrymen soon linked the Jesuit’s fame to the fact that he had produced not only the first great history of Spain, but also one with a distinct and very contemporary edge. The Toledan ecclesiastical historian and political writer Eugenio Narbona explains what kind of edge it was. Narbona calls Mariana the Thucydides and Tacitus of Spain. The Historiae does not merely report events in lucid chronological order and with admirable objectivity, but includes analyses of the mechanisms of princely power. Mariana offers historiography with the added value of political wisdom nurtured on clear-eyed observation of the uses and abuses of power.”

A very beautiful and precious copy, with wide margins, of this precious and rare Americana preserved in its contemporary overlapping ivory vellum.