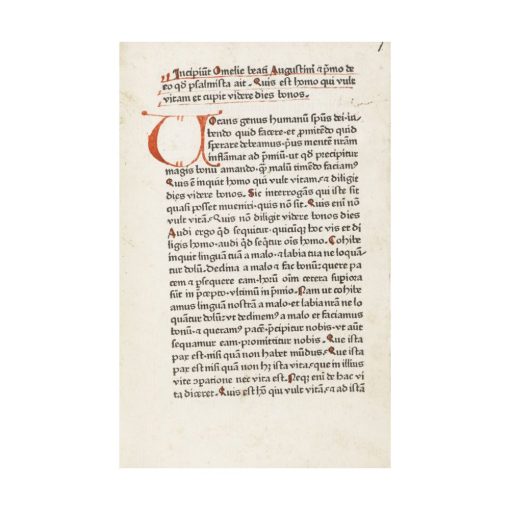 A precious and very rare first edition (no copy listed on the international public markets in the last half-century) of this beautiful text by Saint-Augustine, on the art of living one’s earthly existence well.

During the thirty-five years of his episcopate, Saint Augustine almost never wrote his homilies or sermons in advance.

“Despite that, the Sermons by Saint Augustine is, not only in its entirety, an unequaled example of Christian eloquence but also, and undoubtedly, one of his most beautiful and significant works in regards to its literary value.”

The orator’s main objective is to get closer, with a profound sense of humanity and great comprehension, to the souls of the meekest of his faithful followers, even translating the most complex topics that make up the core of his great theological and apologetic doctrines into simple and clear explanations, illustrated with examples. The language is simple, the words are similar to the one used by people every day, the sharp and clear sentences are often in proverb-like forms; his arguments can be understood by anybody. The tone is always affectionate, debonair, full of humility; and everything is filled with an ardent and permanent apostolate spirit.

For Augustine, tackling the problem of man is tackling the problem of God. The world has a place in his speculations but they are centered on God and man; the exterior world only interests him in regards to man, who plays the part of a sort of mediator between him and God. Saint Augustine’s philosophy is an ardent and uninterrupted dialogue between creator and creature, between man looking for God and God coming to meet him, a spiritual voyage of the finite being towards the infinite. To know oneself in the true essence of one’s being is knowing that God exists and meeting him through “caritas” (love). It is a journey of the heart, but make no mistake: man is, for Augustine, a rational being because he is part of the truth. To “philosophize”, for Augustine, is to reach into oneself to find oneself and to find a truth that transcends oneself.

Saint Augustine is a Father of the Church, the one whom the Christian world has most fought over: Catholics and Protestants, Jansenists and Jesuits all referenced his authority in order to make their doctrines triumph.

A beautiful copy, printed by Ulrich Zel, the first printer of the city of Cologne.

In 1464, Ulrich Zel, a clerk from the diocese of Mainz, is registered at the university of Cologne. In 1466, he publishes his first signed and dated edition of the psalms of Saint John Chrysostom, but his first printed book, undated, was Cicero’s “De officiis”.

This one in particular, seeing as there are only two copies in American libraries and it is missing in the British Museum.