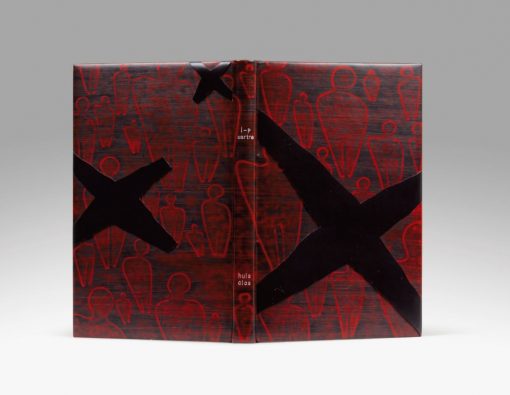 A precious copy, as new, one of 20 on Madagascar paper, first paper,
and enriched with an autographed message from the author to
“Monsieur Edouard Pouljean

Box tainted in red, covers decorated with human silhouettes crosses over by, on the upper cover, an irregular black cross-like shape and, on the lower cover, two smaller ones, doublures in the same tainted box, endpapers in red suedette, untrimmed copy, preserved covers and spine, case-biding. Binding signed by F. Brindeau.

One of 20 copies from the leading copies, on Madagascar paper, numbered IV.

“It is probably Sartre’s most famous play. Rigorously structured around an almost mathematical mechanism, since it is founded on the triangle made up by the characters who are incapable of forming authentic relationships two by two.

It illustrates the fundamental struggle between the consciences once the excuses of social conventions and the hypocrisy of bad faith disappear.” (Dictionnaire des Œuvres)

Huis clos was performed for the first time at the Théâtre du Vieux-Colombier in Paris on May 27th 1944.

One act, five scenes, of which the last makes up at least three quarters of the play, an action reduced to its simplest expression – the confrontation of three characters — located who knows where and who knows when, an ending which solves nothing and opens onto an eternal cycle… In its structure, Huis clos seems to be a formal challenge. The first four scenes are sort of like an opening sequence.

In the living room of what seems to be a hotel room, a valet introduces successively a man and two women. We understand fairly quickly that they are dead and are in hell. No escape possible: they are forever the prisoners of their actions and condemned to “live” for eternity under the stare of the others. Inès, Estelle and Garcin are the tragic witnesses of what is summed up by the now world-famous sentence: “l’enfer, c’est les autres”.

Huis clos is forever linked to L’Etre et le Néant, published in 1943, and can be considered its literary and vulgarized “dramatization”.

A sumptuous copy, very pure, as new, from the leading copies, with preserved covers and spine and covered in a superb binding created by F. Brindeau.

“François Brindeau is respectful of the work as it is. He just allows himself to give to the classical tradition, of which he considers himself the proud heir, a new contemporary feel so that the books can continue to live in their most immortal definition. His work gives off the impression of being physically written and is made up of noticeable stylistic recurrences.” (Yves Baudry)