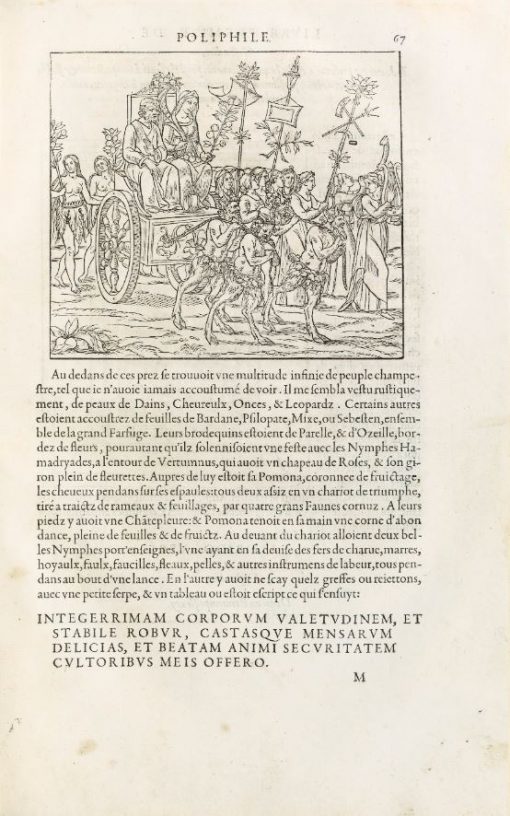 The Songe de Poliphile,
one of the greatest love stories of the Renaissance,
illustrated with 181 lovely engravings.

Second edition in French of this extraordinary love story, one of the most memorable in the literature of the 1500’s and the most famous Italian book of the Renaissance.

Attributed to Francesco Colonna and published in 1499 in a renowned edition by Alde Manuce, this important humanist work was written in a supremely refined language.

Its symbolic storyline, Poliphile’s “strife of love in a dream”, rendered it famous. Even more so was the way it tended to transform the sharp conscience of the splendor of life, an attitude emblematic of the humanists, into a savant scientific endeavor.

The text is of capital interest and can be considered, rightly so, as one of the spearheads of the fiction novel.

Magnificently printed by Marin Messelin for Jacques Kerver, this beautiful edition is the second to present the first French translation of this major work, by Jean Martin.

As an interesting alternative to the first French edition of 1546, this one includes a liminary leaf, signed by Jacques Gohory, who was close to the Pléiade and the Cercle d’Antoine de Baïf, on the verso of the title.

The note was published for the first time in this 1554 edition, published the day after Jean Martin’s death, and confirms the paternity of the work and the identity of the translator.

Because of its superb iconography, this book is one of the most renowned illustrated texts of the 16th century.

It also had considerable influence not only on the esthetics of other books from the same period but on the different applications of decorative art.

The decoration is no longer the one of Italian books but of the école de Fontainebleau and some compositions can be attributed to the talented Jean Goujon.

The illustrations are made up of 183 superb engravings, of which 13 are full-page, of a historiated title, of 2 bands, of 38 decorated letters and of the editor’s unicorn mark. The figures are a free interpretation of the ones from the Aldine edition of 1499. They are the same as those from the first French edition of 1546 in which 14 engravings from topics linked to architecture and gardens were added. One figure was redrawn on l. B6 with an architecture of capitals and columns.

A beautiful copy of a major esthetical work of Renaissance literature.