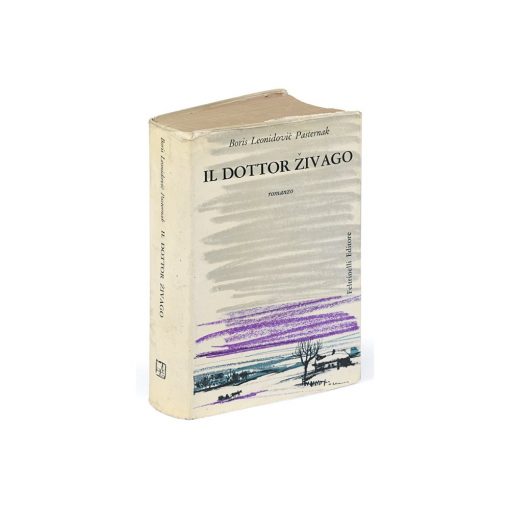 “The publication of Docteur Jivago

after it had been rejected by the Soviet publishers

is an event of planetary impact,
the involuntary challenge of a lonely man
against a totalitarian system”
(D. C. Gillepsie).

First rare and sought-after edition of Pasternak’s masterpiece, which will provoke the ire of the Soviet authorities and earn the author a Nobel prize of Literature.

Giangiacomo Feltrinelli, an Italian editor and fervent communist, managed to transport the manuscript of Docteur Jivago outside of Russia and, resisting the pressures of the Soviet authorities, had it published in Italian in 1957.

Lee Raffaele Biondi, of Biondi Rarebooks & Manuscripts, has undertaken the only bibliographic study listing the different editions of Pasternak’s masterpiece known to this day; here is a summary:

The publication history of the most important Russian novel of the Twentieth Century is complicated.

In the winter of 1945/6 Boris Pasternak, long acknowledged and loved as one of Russia’s greatest poets, had resumed writing actively on a major prose work. In a very real sense, Boris Pasternak had been working on this masterpiece all his life.

Boris Pasternak was born in 1890 into a cultured and artistic urban Jewish family. By 1917 he had published his first collection of original poems. Like all of his generation, much of his existence and worldview was defined through, or against, the Russian Revolution and its aftermath of Stalinism. The Revolution, and its subsequent growing suppression of artistic and social freedoms would dominate his literary existence, especially as he moved from poetry to more controversial prose with work on his masterpiece, Doctor Zhivago.

As early as February 1946, Pasternak optimistically told a friend that the novel would be ready by that summer. Meanwhile, a brief fifteen-month post-war period of relative liberalism came to an abrupt end during August 1946 when the Party Central Committee passed the resolution “On the Magazines Zvezda and Leningrad” which denounced the publication of material “hostile or alien to the interests of Soviet literature.”

Pieces of the working drafts of Zhivago began being circulated in the Russian underground literary community, and being smuggled to the West through Oxford, as early as 1948. He warned against any attempts to print the material because such publication “would threaten me with disastrous, not to say fatal, consequences, since the spirit in which it is written and my situation here make its appearance impossible.”

The controversial Italian Communist publisher Giangiacomo Feltrinelli of Milan tried to obtain a typescript from Pasternak. Feltrinelli began to try to obtain the rights to publish in Italy in Italian. Pasternak agreed to such an arrangement.

By this time the KGB had issued a communiqué describing Zhivago as “a heinous calumny” thus making its potential publication an affair of the state. At this point the Soviet journal Novy mir officially turned down the novel.

The State was attempting to recover the escaped typescript in Italy and to prevent the Feltrinelli edition. Feltrinelli, though an avowed Communist, declared he would sooner leave the Party than break his commitment to Pasternak and this great novel. Feltrinelli wanted to publish the first edition so as to have international copyright control and he knew that translations were already in the works in English, French, German, Czech and Polish.

On 22 November 1957 the Italian translation of Doctor Zhivago was published by Giangiacomo Feltrinelli Editore of Milan. The highly anticipated first printing sold out the first day; many reprints followed immediately. The novel was greeted as a major artistic triumph.

Numerous translations into many languages around the world followed.

Boris Pasternak was awarded the Nobel Prize for Literature in 1958. Under intense pressure from the Soviet authorities, Pasternak was forced to decline the award. In a published letter from Pasternak to Khrushchev Pasternak publicly rejects the Nobel Prize, but refuses to apologize, closing with the phrase: “With my hand on my heart, I can say that I have done something for Soviet literature and I can still be useful to it.”

Chronological Bibliography of the First Editions of Doctor Zhivago.

The Gallimard edition seen through the press by Jacqueline de Proyart. Anonymous translation.

September 1958 in New York by Pantheon and, simultaneous or just thereafter, in London by Collins & Harvill.

The first text by a Soviet writer to contest the ideological foundations of the communist system, Le Docteur Jivago created a sensation in the Western world where its literary qualities guaranteed it a very large popular success.

In October 1958, the attribution of the Nobel prize of Literature generated the ire of the Soviet authorities who had tried to stop its publication.

“The publication of Docteur Jivago in 1957, in Italy, after it had been rejected by the Soviet publishers is an event of planetary impact, the involuntary challenge of a lonely man against a totalitarian system. It is only in 1987, because of the perestroika, that the Writer’s Union rehabilitates Pasternak’s memory by cancelling his exclusion and his Docteur Jivago is finally able to reach its Russian readers without any obstacles.” (Dictionnaire des Auteurs)

“Doctor Zhivago has become perhaps the most celebrated Russian novel of the twentieth century. Because it was published in the West, it was viewed by the Soviet authorities as providing ideological ammunition to the Western foe and as an anti-Soviet work.” (D. C. Gillepsie)

A copy preserved in its covers and dust-jacket, as issued.