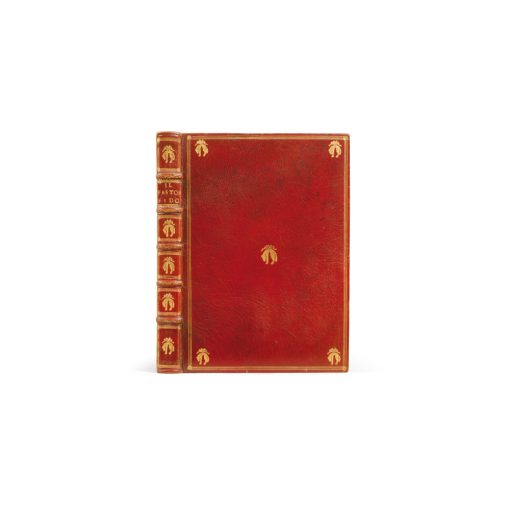 Il Pastor Fido bound by Padeloup
for the baron de Longepierre.
“The Pastor Fido was the overall corruptor of youth”

A beautiful and precious copy,
preserved in its red morocco binding
with the Golden Fleece emblem.

A beautiful copy bound for the baron de Longepierre in red morocco with the Golden Fleece emblem.

A beautiful and precious edition of Guarini’s masterpiece, given by Claude Cramoisy.

Copy enriched with two engraved portraits of the author, the first based on Jode and the second by Demautort.

“The most considerable play by Batista Guarini is Il Pastor Fido, a new play similar to the Idylle of the Fable de Bergerie.

It is a book that made it known to the whole world that its author was a natural poet.

It is a play that made Guarini’s reputation expand in all the principal parts of Europe.

It is also said that it crossed the seas and went to the other world. It is a pastoral drama about the loves of male and female shepherds. Mr Rosteau says it is one of a kind and that it contains the most beautiful gallantry ever imagined by the Italians. One can notice all the intricacies of the language, and he tried to insert in it all the softness, the grace and charms he encountered in the poets of his country and in street conversations. So that, when the predicators and moralists of all sides will have managed to rid the world of all the tenderness of illicit love, we would still be able to find them in this pernicious poem.

No one has better succeeded in reducing the horror of vice, no one has ever given it such a delicate and misleading color.

To summarize, no one has ever done a greater favor to the Demon of impurity to make his way into the hearts and the minds of thoses farthest from him ; there aren’t many books that have seduced as many people.

Even though the Pastor Fido was performed in all the courts of Italy and even in front of popes, it was censored numerous times due to is licentiousness. (Michaud).

A beautiful and precious copy bound for the baron de Longepierre in red morocco with the Golden Fleece emblem.

According to Portalis, this kind of binding can be attributed to the workshop of the Padeloups.

Portalis accurately recalls the words of Charles Nodier : “The bindings of the Longepierre collection benefit from the same credit amongst amateurs than those that foreshadow the books by Grolier, the president De Thou and the count of Hoym. They are truly perfect in their simplicity, and this admirable collection, which doesn’t seem to have been very big, rarely appears at sales.”