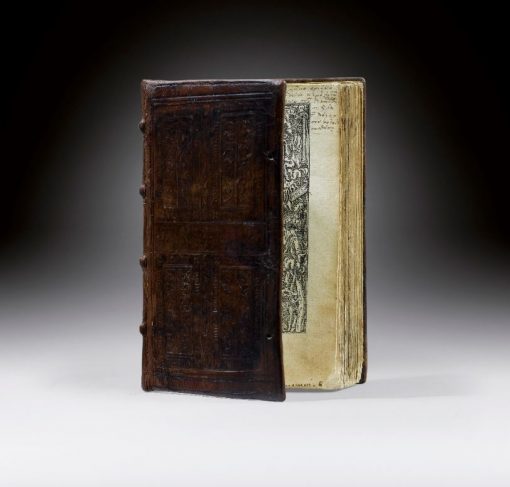 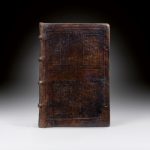 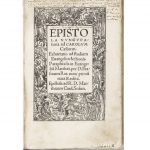 First edition of “one of the major works by Erasmus”

printed by Froben in Basle in March 1522
and preserved in its interesting contemporary Flemish binding.

8vo [168 x 113 mm], signatures A-B⁸ a-y⁸ z⁴ & ⁸; Light-brown calf blind-stamped, fillet around the covers, the covers are divided into four vertical parts decorated with a branch of foliage and an animal repeated numerous times and each framed with Latin phrases, in the center of the covers there is a horizontal frieze decorated with five imaginary beasts, corners and spine partially restored.
Flemish contemporary binding with the name Matthew handwritten in ink on the lateral edge.

First edition of “one of the major works by Erasmus”, printed by Froben in Basle in March 1522.

“Erasmus appeared to be a champion of humanism and a master of piety, a sort of director of conscience for the elite. François Ier tries to lure him to the new Collège royal and writes to him in his own hand, but he can’t seem to make up his mind regarding the financial conditions of this position. Erasmus is present at the crowning of Charles V (1520). But to the superficial pomp of court, he prefers independence and work. He somewhat settles both in Antwerp and Louvain where he heads for four years the trilingual (Latin, Greek, Hebrew) College founded through the legacy of the intellectual canon Jérôme de Busleiden in order to educate in the new spirit some dozens of students. During the summer of 1521, Erasmus, feeling tired, rests in Anderlect, a suburb of Brussels. That same year, he is constantly attacked by traditional theologians and, fed up, he decides to settle in Basle with Froben. During these years, he publishes two major works : the Colloques as of 1518, and the Paraphrases of the Nouveau Testament : Épitres (1517-1521), Évangiles (1522-1523).”

This is the Gospel according to Matthew.

A remarkable contemporary Flemish binding created around 1522, very similar to the binding reproduced and described under n° 117 of the “Gothic and Renaissance Bookbindings” E. Ph. Goldschmidt (1928. London), a work by John Bosscaert, described as such :

“Dark calf. “On each side three panels, enclosed within intersecting two-line fillets prolonged to the edges of the cover. (1) Panel (82 x 50 mm): with a marginal legend interrupted at each angle by a quatrefoil: vevs • vet • nobis • suam • pacem • et • post • mortem • vitam • eternam • amen. The inner portion is divided into two vertical compartments, each occupied by a branch of foliage and fruit enclosing within its curves four animals facing those in the other compartment. (II) Panel (82 x 50 mm): with a marginal inscription: ob • lauvem • xpristi • librum • hunc • recte • ligaui • Johannes bosscaert. The enclosed portion similar in design to the above described. (III) Panel (82 x 18 mm): in four rectangular compartments: a wyvern, a lion, a wolf and a hound”. Top panel of back slightly damaged.”