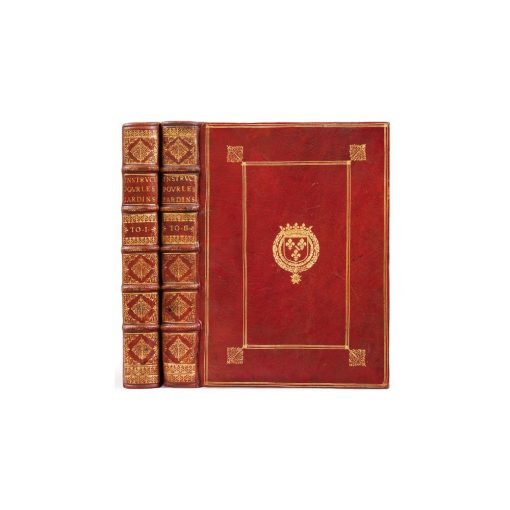 A precious, superb and very rare copy from the first edition
of La Quintinye and Charles Perrault
describing the gardens of king Louis XIV,
bound in contemporary red morocco with the arms of the prince de Condé
whose gardens in Chantilly were designed and created by La Quintinye in 1665.

First edition of the most famous French book dedicated to the gardens of Louis XIV and admirably preserved in exceptional contemporary condition : contemporary red morocco binding decorated with a motif à la Duseuil and stamped on both covers with the arms of the Prince de Condé whose gardens in Chantilly were designed and created by La Quintinye (1626-1688) in 1665.

The art of growing fruit trees was still in its infancy at the time. Thanks to his research and his sagacity, La Quintinye elevated it to a high degree of perfection. He first led a study on the nature of the grounds, the most favorable location and orientation for the plants, the quality of the fruit trees, etc.

Le prince de Condé, having heard of him, wanted to get to know him and called him to Chantilly to hear his teachings. Of an effusive and honest nature, he pleased the prince.

It was the same with Charles II, whom he met while on trips to England, and who vainly tried to keep him close. Louis XIV met La Quintinyie through Colbert and was charmed by his knowledge. He appointed him steward of the fruit gardens of the king (1673) and then general director of the fruit and vegetable gardens of all royal houses (1687) and built him a house. On order of the prince, this knowledgeable gardener created, in five years, in Versailles (1678-1683), on the most defective terrain, an admirable fruit garden. He transformed the soil and the trees bore magnificent fruits and also early fruits. He also created vegetable gardens in Chantilly for the prince de Condé, in Vaux for Fouquet, in Sceaux for Colbert, in Rambouillet for the duke de Montausier. At the time of his death, La Quintinyie had not published anything but he left, under the title Instructions pour les jardins fruitiers, a six book manuscript that was published by his son (Paris, 1690, 2 vol. in-4).

The volume is renowned because it contains one of the most beautiful texts by Charles Perrault: his Idylle of 222 verses addressed to “A Monsieur de la Quintinye sur son livre De l’instruction des jardins fruitiers et Potagers” ; it is among the small number of Charles Perrault’s creations to which Boileau had granted some praise.

The text is divided in six books. The first ends with a dictionary of gardening terms ; it is a snapshot of the language used for this art at the time. The four books that follow are about fruit trees, when to trim them, graft them, etc. In the sixth, he talks about vegetable gardens, indicating, month by month, what is to be done. He ends with a treaty on orange trees ; here, he tries to prove that their cultivation is much easier that one would think. Finally, he ends with some reflections on agriculture : it is a sort of treaty on floral physiology, a theory he exposes to support the practice that he has explained in his work.

The different editions and counterfeits of this book, which followed soon after, are a testimony to its importance.

A precious, superb and very rare copy preserved in its beautiful contemporary armorial binding created for Henri-Jules de Bourbon, prince de Condé, duc de Bourbon, d’Enghien, de Châteauroux, de Montmorency et de Bellegarde, first born son of Louis II (le grand Condé), and of Claire-Clémence de Maillé-Brézé. He bore the titles of duc d’Albret while his grandfather was alive (1643-1646), of duc d’Enghien, while his father was alive (1646-1686) and of prince de Condé from 1686 to his death ; he was then called Monsieur le Prince. Born in Paris on the 29th of July 1643, he was mixed up as a child in the revolts linked to the Fronde and returned to grace with his father in 1660 ; he was appointed grand maître de la maison du roi on 2 February 1660, chevalier des ordres du Roi on 31 December 1661, brigadier de cavalerie on 2 February 1668, gouverneur de Bourgogne et de Bresse on 22 January 1670, maréchal de camp on 20 April 1672, lieutenant-général in 1673 and premier pair de France. He left the army in 1693 and died on April 1st 1709, in Paris. He had married Anne de Bavière, Palatine princess of the Rhine on December 11th, 1663.

“We have seen from the previous plate that the prince greatly enlarged his father’s collection, but it was completely dispersed upon his death.” Olivier, pl. 2625.