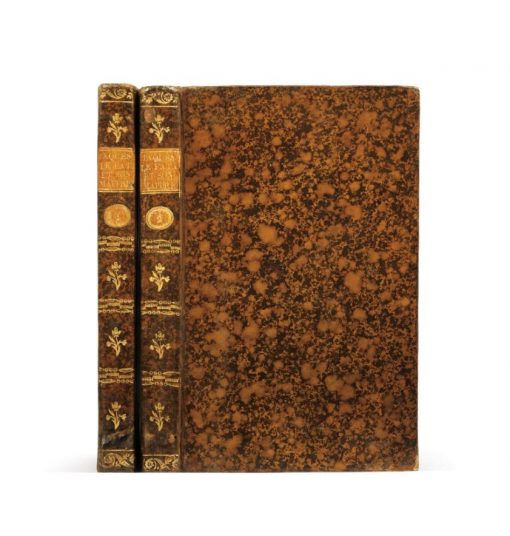 First edition of the famous philosophical tale by Diderot.

The text at the beginning of the book, « A la mémoire de Diderot », is by Jakob-Heinrich Meister, a friend of Necker and Grimm’s successor at the head of the Correspondance littéraire.

In 1765, Diderot seeks to sell his book collection for his daughter’s dotage.

The Empress of Russia, Catherine II, acquires it but leaves it to his enjoyment during his lifetime.

Invited in Saint-Petersburg, Diderot undertakes the journey in 1773, at the age of 60. Shortly after his departure, he begins this novel ; he stays five months at the Russian court and finishes Jacques le fataliste whilst in Russia.

“Like the Neveu de Rameau, “Jacques le fataliste” is a long dialogue, but this dialogue contains all sorts of adventures, tales and extremely diverse digressions… This novel, quite original and strange in spirit and presentation, recalls numerous novels from the 18th century : from “Le Diable boiteux” by Lesage to “Candide” by Voltaire and “The life and opinions of Tristam Shandy” by Sterne.

Diderot acknowledged that Sterne’s work was his principal source of inspiration. The truculence of a great number of scenes, the freedom of language and the vivacity of the narrative also reveal the influence of Rabelais, which Diderot greatly admired. And Jacques, in some ways, resembles Panurge.

That being said, this is one of the most original works of French literature, even in its apparent faults — but they are done on purpose —, in the intricate weaving of the episodes, the density of the topics broached, the diversity of the digressions that renew our interest page after page. It certainly allows us to better grasp Diderot’s vigorous, paradoxical, generous and most often great temperament.” (Dictionnaire des Œuvres)

A precious copy, on Dutch paper, wide-margined, preserved in its contemporary binding.