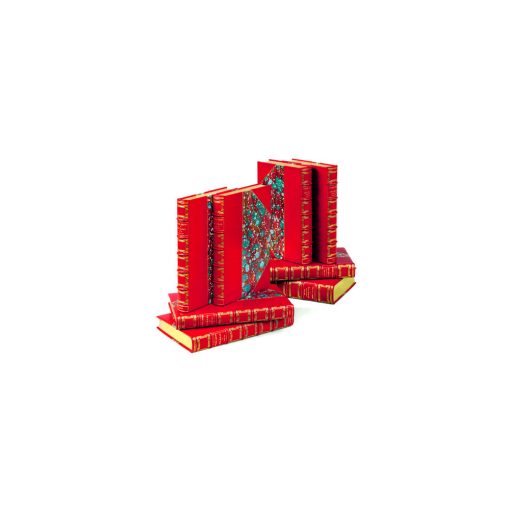 One of the leading copies on Japan paper.

A precious copy, untrimmed, with preserved covers and spine,
grangerized with an autographed letter signed by the author.

First edition of Julien Green’s Journal, “one of the most prestigious of the 20th century”. (M. Raclot)

Grangerized with an autographed letter signed by the author dated November 2nd 1947 and addressed to a critic to thank him for an article full of praise on “Si j’étais vous”.

Green’s Journal is one of the most prestigious of the 20th century.

Kept day to day since 1928, full of poetry and creativity, with a strong unified tone, it is picturesque and brilliant and marries introspection, spiritual search and observation of the world.

The Journal stands out by its diversity. The author’s thoughts on the world and on himself alternate without there ever being the impression that their unity is ruptured because of the presence of transitions made up of comments on a conversation, a book he read or a dream.

There are many amusing anecdotes, in particular when the author mentions André Gide.

But a subtle poetry also emanates from the Journal : moments of happiness without cause, long daydreams, Proustian resurgences of memories, joy of music…

Solitary by nature, Julien Green is however a diarist for whom the outside world exists.

He encounters many artists, people from the literary world…

Thus the Journal becomes a chronicle of the writer’s social life.

As for current affairs, they are not absent : political events make up a tragicomic backdrop on which the writer’s thoughts bounce off.

The Journal is precious because it shows us over a long time period what the “spirit of the times” were, the climate that reigned, and that is what gives it its irreplaceable aspect and its modernity. (Michèle Raclot, Le Journal de Julien Green entre tradition et modernité)

“The journal, writes Green, is the novel of which the novelist is the main character. This Journal tells the truth in the way of a negative that puts shadows where we would want there to be light, and all of the world’s sincerity won’t change a thing ; because the novelist only tells his whole truth when he makes things up.” (F. Vernescu, Clivage et intégration du moi chez Julien Green)

A French writer of American origin, Julien Green experienced the 20th century as the discreet witness of a time of despair where the sufferings, the joys and the hopes were transposed in an often dramatic narrative universe nonetheless always full of suggestions and thoughts.