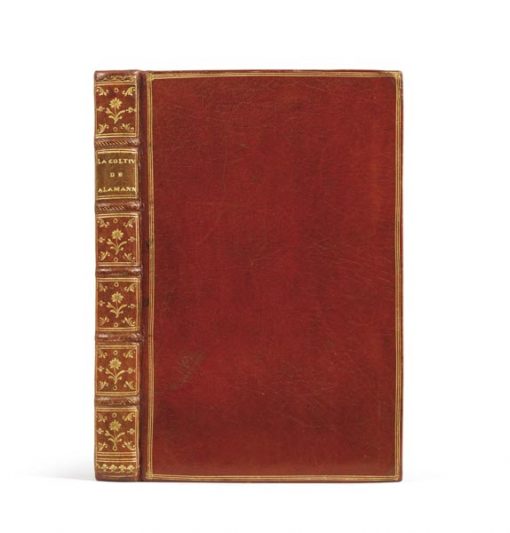 A precious and beautiful copy preserved in its old red morocco binding.

The poem on agriculture is one of the first Italian texts printed in France.

“Very esteemed poem by the Italians. Very esteemed edition; it is preferred to all others because it was done with the presence of the author who edited the proofs” (G. de Bure).

Complete copy including the “two privileges signed by François Ier to the author, which are sometimes missing” (G. De Bure).

“This beautiful and rare edition is the first of this excellent poem. The best copies are those containing, at the end, the Errata, which is missing in a few” (P. A. Crevenna).

Made up of six books and more than five thousand verses, the poem is about agriculture ; it alludes to the work in the fields, gardening, the stars and their influence.

The poem is dedicated to François I.
Beautiful edition of one of the very first Italian texts printed in France.
La Coltivazione is the only book published by Robert Estienne in Italian, entirely printed in italics.

As a Florentine coming from an illustrious family, Luigi Alamanni (1495-1556) received an excellent education and participated in his youth in discussions happening in the Orti Oricellari, where he bonded with Machiavelli.

Alamanni had important responsibilities during the last years of the Florentine republic. Implicated in the anti-Medici plot of 1522, he fled and found refuge in France where he stayed until the fall of the Medici in 1527. He went back into exile in 1530 when the Medici came back. In France, he worked for the cardinal Ippolito d’Este who tasked him with several missions in Rome. He was later received at court ; in his “Recherches de la France”, Estienne Pasquier mentions him reading la Commedia de Dante to the king. Linked with the literary Florentine circles, Alamanni played a political role.

« He was heir to the richest poetical tradition of Florence. Following François Ier’s wishes, he introduced the court to Petrarchan forms and themes destined to renew the monarchy’s praise.
A perfect representative of Tuscan classicism, Alamanni gave the poets of the Pléiade a new poetic model, inspired by the best Latin and Greek sources, as well as the example of a collection structured around genres, and precise genres ; the structure of Ronsard’s Pindaric ode imitates the Innis, and the Horatian satire was also taken from Alamanni, in particular by Jean Vauquelin de La Fresnaye. » (J.P. Barbier).

During the Renaissance, when La Coltivazione was published, literary works and works of art expressed the deep evolutions undergone by the idea of man’s place in the universe, his role in nature and his relation du God.

A precious and beautiful copy preserved in its old red morocco binding.