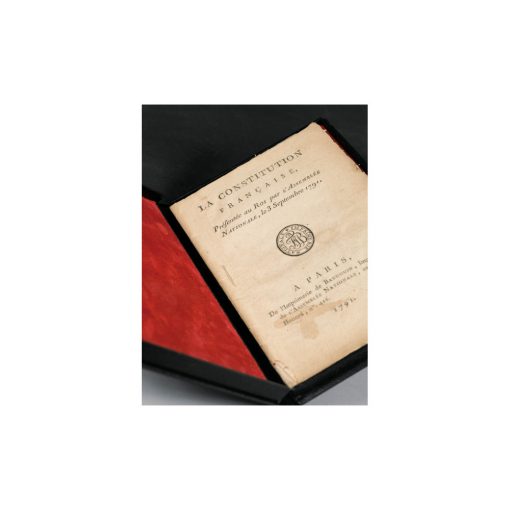 The Constitution française de 1791,
“one of the most venerable political monuments in the history of humanity”

Printed on the 5th of September 1791, two days after the text was approved by the Assemblée Nationale, and a few days before the oath to the Constitution by the king in front of said assembly on the 14th of September, this edition was apparently only destined for the members of the Assemblée and not for sale.

It presents for the first time the complete text of the Constitution divided in seven parts, preceded by the Déclaration des Droits de l’Homme et du Citoyen du 26 août 1789 and contains no table, contrary to the editions published after the king’s pledge.

“The Constitution of 1791 is one of the most venerable political monuments in the history of humanity.” (P. Larousse)

One of the most precious documents in the political history of France.

The Constitution of 1791 is the first of our revolutionary charters and, whatever the imperfections, it remains one of the most venerable political monuments in the history of humanity.

Finished on the 3rd of September 1791, the Constitution was accepted by the king on the 13th of the same month. The following day, he pledged an oath and signed the constitutional act, founding national sovereignty.

The result of the work of the Assemblée Nationale Constituante among whose members were Mirabeau, Sieyès and Condorcet, the Constitution of 1791 opens a new political era.

A supreme manifestation of political power, it is the constitutional act that will transfer the king’s sovereignty to the nation, the foundation of constitutional monarchy.

The nation set the boundaries of the royal power and detailed the conditions in which Louis XVI could continue to reign.

It is preceded by the 17 articles of the Déclaration des droits de l’homme et du citoyen, which constitutes the “death act of the Ancien Régime”. (Aulard)

“On August 5th 1791, M. Thouret read the Constitution… A religious silence accompanied this reading; but as soon as it was done, there was an explosion of applauses that lasted a long time, and there were tears of joy in everyone’s eyes: it was like finally arriving at dock after a terrible storm.

On September 4th 1791, when the king entered the chapel of the castle, many voices yelled: “Vive la Nation ! Vive la Constitution !” ; from all around there was also: “Vive le roi ! Vive la liberté ! Vive le premier roi constitutionnel des Français !” The publication of the Constitution in the entire country was done with the greatest solemnity. The huge majority had hoped that the completion of the constitution would end the Revolution.” (Choix de Discours prononcés à la tribune depuis 1789, V, pp.56-86)

A beautiful and precious copy, untrimmed, preserved in its wrappers, in its rare condition of publication.