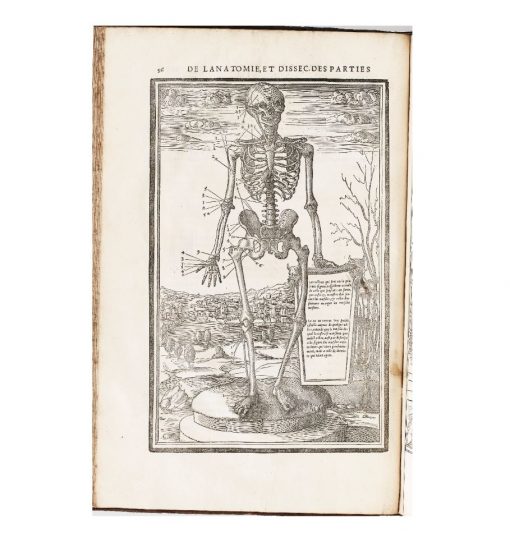 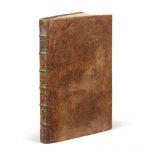 First French edition
of one of the most precious books on anatomy of the 16th century,
decorated with 64 woodcuts
of which 7 are signed with the Lorraine cross,
preserved in its old binding.

First French edition of “La dissection des parties du corps humain” by Charles Estienne, printed in Paris by Simon de Colines in 1546, renowned for the beauty and interest of its anatomical engravings.

“Beautiful edition, the last one where the name of the famous printer Simon de Colines is mentioned.” (Brunet)

The Latin edition was published the year before, in 1545.

This edition includes 64 beautiful full-page woodcuts representing anatomical plates that are striking because of the positions of the bodies : “the most curious in Charles Estienne’s book are the small anatomical blocks shaped as a square and inserted in a series of naked bodies” (cfr, cat. expo KBR). These “very small blocks” render the anatomical part studied totally incongruous in regards to the whole body. These anatomical parts are due to Estienne de la Rivière, the male and female figures were drawn by Carabaglio from Piero del Vaga and Giovanni Battista Rosso.

“Kellett suggests that the male figures in this series which are clearly corpses supported by trees and masonry may be based on anatomical designs known to have been made by Giovanni Battista Rosso from disinterred bodies from a banal ground at Borgo, the Rosso sketches providing the figure into which the La Rivière dissections could be inserted. E. Weil, concludes that the figures were originally intended for an anatomy for artists and were adapted to Estienne’s purpose by the use of the medical insets. The blocks for these illustrations and some unused blocks from the same series passed to Jacques Kerver, who printed them as volumes of plates under the title, “Les figures et portraicts des parties du corps humain”, in 1557 and 1575.

The first cut is signed with the initiales « S.R. » of the surgeon Étienne de la Rivière who assisted Estienne in preparing drawings of the anatomical details.” (Harvard)

This edition is enlarged with 2 woodcuts in the first issue on leafs A6r et A7r.

“These two subjects, signed by Jollat, appear for the first time in this 1546 edition.” (Harvard)

9 woodcuts are signed by Jean Jollat.

7 woodcuts are signed with the Lorraine cross and probably come from the workshop of Geoffroy Tory.

This book is also the first to include a detailed description of the venal and arterial systems but their presence was somewhat eclipsed by Vesalus’s Fabrica from 1544.

Charles Estienne (1504-1564) belonged to a family of renowned Parisian printers. He worked in the workshop for a while and then went on to study medicine.

He then dedicated himself to the publication of an illustrated anatomy with his friend Estienne de La Rivière, surgeon and engraver, who started the wood engravings as early as 1530.

Faint waterstains on some leafs, faded gilt on spine, but precious complete copy, one of the few preserved in its old 17th century calf binding.

This book, used since the 16th century because of the beauty and interest of its woodcuts, doesn’t exist much in an old binding.

It comes from a library in Bruges and bears an old seal.