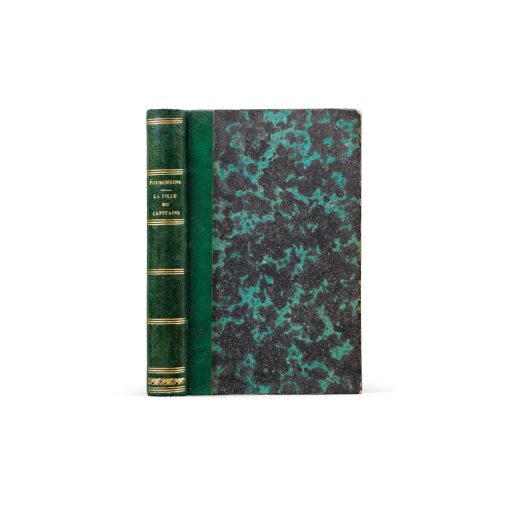 An attractive copy, very pure,
preserved in its contemporary binding.

Russian literature makes itself known in France in the first half of the 19th century through its poets. “L’Hymne à Dieu” by Gavril Derjavine acquired great fame in Europe and was translated three times into French between 1811 and 1822.

A new period opens with the translation by Louis Viardot of Gogol’s “Nouvelles” in 1845.

The translation of Pushkin’s “La Fille du capitaine” in 1853 by Viardot met with great success. Viardot-Tourgueniev and Mérimée are in those years the main figures of Russian translation into French.

A historic novel by Alexander Pushkin (1799-1837), “La Fille du capitaine” took shape while the poet was doing research in the State archives in Saint-Petersburg.

The reign of the empress Catherine II makes up the historic backdrop of this story. The adventures of the young officer Grinev and his manservant Savéllitch make up an amiable pretext allowing Pushkin to unroll before us the splendors of his concise and elaborate prose.

We witness the departure of the lieutenant and his faithful companion from his paternal house towards the far-away fortress of Belogorsk where Grinev was appointed. Then, it’s the encounter with Maria Mironova, the fortress commander’s daughter; the duel with a rival, the siege and occupation of the fortress by the rebel Pougatchev. And, finally, Grinev’s arrest, on grounds of high treason for having had involuntary contact with the rebels and, in the end, the imperial pardon obtained by Maria in his favor. The action, which takes place in a far-away Russian province in the 18th century, is told by Grinev himself, which gives this novel the aspect of a family saga.

“The narrative is woven with great mastership, with some sparks of such powerful vitality that the problem of historical accuracy is nonexistent, the figures of Catherine II and of Pougatchev having entered into the magical reality that any genius gives his work. The novel met with great success. It influenced all of the following family chronicles written in novel form.” (Dictionnaire des Œuvres)

“Alexander Pushkin may have been the “founding father” of modern Russian language and literature. He is undoubtedly the writer who has most contributed to the creation of a new literary idiom, a synthesis between the spoken and written word.” (Jean-Paul Polet)

“A lyrical and epic poet, a prose and verse novelist, a critical historian, Alexander Pushkin (1799-1837) is not only one of the greatest Russian writers but an incarnation of its national genius. In his lifetime, he had a decisive influence on his contemporaries: he was the spark that alighted numerous poets and writers. Man and nature are here represented to their fullness.” (Nikita Struve, Dictionnaire des auteurs)

An attractive copy, very pure, preserved in its contemporary binding.