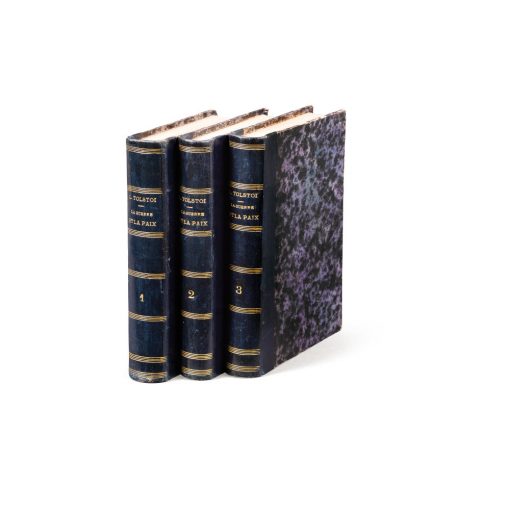 “the greatest work of Russian literature

and one of the most important of world literature”

A beautiful and precious copy preserved in its contemporary binding.

Rare first edition of the French translation of Tolstoy’s masterpiece. (Vicaire, who described the 1885 edition as being a first.)

Printed in Saint-Petersburg, this translation was given by the princess Irène Ivanovna Paskevitch, birn Vorontsov-Dachkov.

It is based on this first French translation that Clara Bell will give the first English translation of Guerre et Paix, published for the first time in 1886.

In a letter to Tolstoy dated January 12th 1880, Turgenev writes that only 500 copies were sent to France and sold by Hachette.

“The greatest work of Russian literature and one of the most important of world literature.

Russian life is here described in such a complete fashion and placed on a level of such high humanity that this novel can be considered as one of the most beautiful monuments of European civilization.

Set on the backdrop of the great historical events of the early 19th century, this novel tells of the adventures of two families belonging to the Russian aristocracy, the Bolkonskys and the Rostovs. In a way, it is the chronicle of those two families.

The importance of La Guerre et la Paix can be explained not only by the immensity of the frame and the vastness of the artist’s vision but also by what some have called the “moral element” and others the “philosophical element”. The universal element is the philosophy relating to Tolstoy’s principles. According to him, it is neither the spirit of the generals and leaders nor the tactics of the general staff that must be considered as the decisive factors of great historical events; it is the spirit of the popular masses, the strength of will of the pure souls, united in a common effort. Furthermore, the author is convinced this philosophy finds its best expression in the soul of popular Russia.

La Guerre et la Paix should be placed among the epic sagas, closer to the Iliad than all modern works of European literature.” (Dictionnaire des Œuvres)

“You must read “La Guerre et la Paix” by Leon Tolstoy. It is one of my bedside readings, I go back to it during my leisure time, while on vacation in the countryside each year. I tried to obtain this rare book. It was sold out and the editors were hesitant about the expenses required for a three-volume translation. But they decided to go for it. The novel, as we all know, was very successful. It was bought as if it was the new Gospel. (Extract from a letter by d’Alphonse Daudet to the critique Hugues le Roux in 1882)

A beautiful and precious copy of this major text of Russian literature, preserved in its contemporary binding.