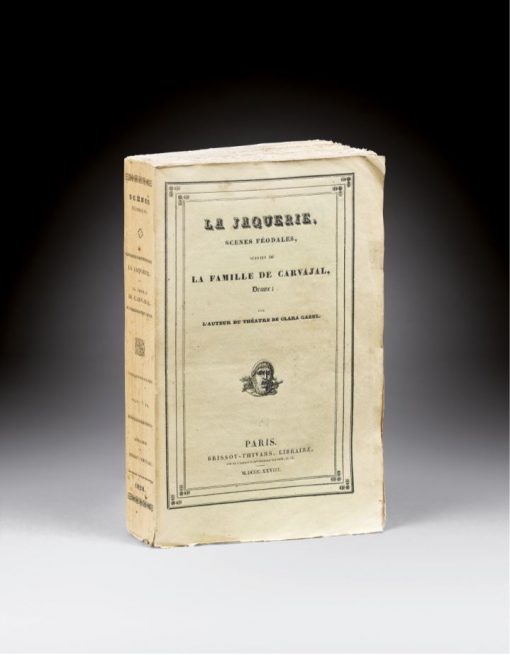 First edition of La Jaquerie by Mérimée, “maybe the masterpiece of Romantic theater with Lorenzaccio, but more popular” (Roger Bellet).

A very beautiful copy, entirely untrimmed,
preserved in its publisher’s wrappings, as issued.

“It is maybe the only important Romantic text, not illustrated, that came out of Balzac’s print shop with de Vigny’s Cinq-Mars, 1827, third edition.” (Carteret)

Wanting to be a “man of letters and lead”, Honoré de Balzac got his printer’s certificate in 1826 and immediately bought the foundry Gille with a few associates, but he ruined himself in this enterprise, therefore going back to his literary endeavors. His mistress Mme du Berny, bought the whole thing back in 1828 and entrusted it to her son, the founder of the Deberny & Peignot foundry.

This vast dramatic composition tells of the French peasant insurrections in the 14th century, during the captivity of king John. The arrogance of the feudal lords is personified by the baron d’Apremont. His violence and cruelty pushes the peasants to despair under the inspiration and guide of the intrepid monk brother John.

An energetic and touching portrayal of feudal times where the nobles, villains, monks and soldiers are all broadly depicted. This text contains all of the dramatic verve and imagination that so eminently distinguished the first essays by the author of Clara Gazul. Emerges the impetuous and always original talent of the author, but this time matured by lengthy studies of history and mankind. A vivid and authentic dialogue that transports the reader, almost unwillingly, to a time and a place very different from what he or she is accustomed to.

“La Jaquerie is the first step towards the historically-inspired novel that will be Mérimée’s literary glory.” (Jean Autin)

A very beautiful copy, entirely untrimmed, preserved in its publisher’s wrappers, as issued.