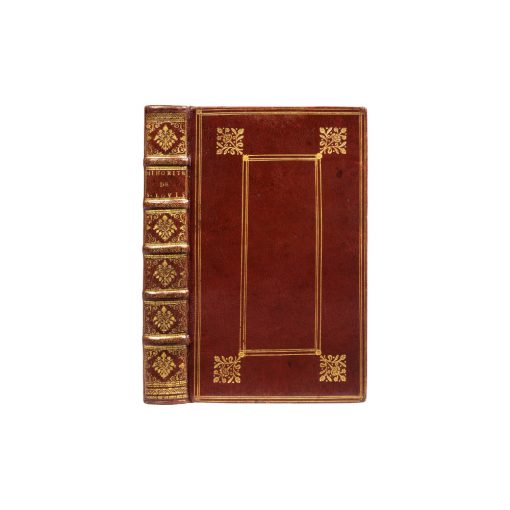 The Regency of the Reine Blanche, entirely ruled,
with an admirable contemporary binding by the Caumartins
in red morocco with doublures and decorated with gilt tools.

Second edition partly first of these historical treaties relating the regency of the Reine Blanche during Saint-Louis’ minority, the history of Louis XI from his birth to the second year of his reign and the history of Henri II’s reign.

“Varillas’ narrations are quite pleasant and he organizes his narrative with skill and intelligence.” (Palissot)

“Among all those who decided to write our history, no one went as deep as him. His style is noble, elegant and really historical.” (Huetiana, p.49)

“Before he sent his texts to the presses, they were distributed under the table in manuscript form, and he already had a great reputation. Everyone wanted these precious pieces of history that came out of the study of the one-of-a-kind Varillas.” (Vigneul-Marville)

Antoine Varillas (1624-1696) obtained in 1648 the charge of historiographer of Gaston, the duke d’Orléans. He worked in the king’s library but was dismissed by Colbert. Mme de Sévigné and Pierre Bayle greatly estimated the writer. Voltaire, who considered him to be “a pleasant read”, drew from him for his historical writings.

His texts, judged subversive and later considered to be an early trigger of Republican thinking, were banned by Colbert.

A very beautiful copy, ruled, with wide margins of one of the rarest historical texts bound by the Caumartins.

Provenance : Library of Cortland Bishop, with ex-libris ; handwritten ex-libris on the title page; library shelf mark on a blank leaf.