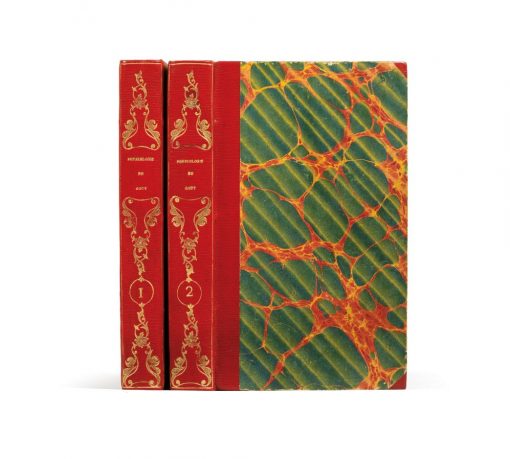 “His Physiologie du goût is as famous
as the Comédie Humaine” (Honoré de Balzac).

First edition and first issue with the “E” of “Bourse” written horizontally on the address of the publisher on the title of the first part.

This first edition is very rare, only 500 hundred copies were printed on the author’s dime and put on the market two months prior to his death.

“Everyone knows the Physiologie du gout (…) which earned the author the glory of passing onto posterity.” (Vicaire)

This famous guide for all gastronomes by the facetious magistrate Anthelme Brillat-Savarin required 25 years of attentive care by the author before being sold in December 1825, but bears the date of 1826.
Deputy of the Etats généraux of 1789, exiled in Switzerland in 1793 and later the United-States, Brillat-Savarin divided his existence as of 1796 between his work as magistrate of the Cour de cassation and the writing of this book which would make him famous.
The Physiologie du goût is a highly successful spiritual and attractive text praised in the following terms by Grimod de La Reynière : “His book can be considered high gastronomy, whereas mine are nothing but a sad rhapsody.”

With constant irony, Brillat-Savarin brilliantly intertwines culinary questions tackled in a very precise and evocative way, personal reflections on beings and things and aphorisms, made famous by their singularity.

The objective of the Physiologie du goût was to consider the action of food on man’s morale, on his imagination, his mind, his judgement, his courage and perceptions.
The author studies the human senses, the love of good food, which is exclusive to mankind, exposes his views on digestion. This book also contains rare recipes and spiritual aphorisms. Balzac says of him : “He was :  “a great ma” of the mind… Since the 16th century, with the exception of La Bruyère and La Rochefoucauld, no prose writer has managed to give such depths to the French language… His Physiologie du goût is as famous as the Comédie Humaine” ; and Alexandre Dumas wrote: “All of a sudden, we were gifted one of the most charming books on gastronomy one could ever dream of, the Physiologie du gout.” (D. Desrochers, La convivialité)

After the frugal times of the Revolution, the French rediscover the art of eating and drinking ; the fear of hunger is but a mere memory, the last great famine having been in 1794, during the Convention. This cuisine and way of life conquers the elite, the nobles and even the less fortunate citizens ; restaurants open, where the client can make up his menu as he sees fit instead of having to do with the daily proposal as was the case in the inns. Gastronomy once again becomes a « cult », that has its magazines, its guides and books, like the Almanach des gourmands, the Journal des gourmands et des belles and the Manuel des amphitryons. Gastronomy clubs are created, like Jean Anthelme Brillat-Savarin’s, who wrote: « A nation’s destiny depends on the way it feeds itself. » (T. Lenz)

The duchess of Abrantès was married to Junot, governor of Paris, and thought highly of the Almanach des Gourmands and the Physiologie du goût, the works of two men she had met at Talleyrand’s : “Brillat-Savarin eats to live but seeing how he wants to live well, he gives it his full attention. After having read the Almanach des Gourmands, I wasn’t hungry… after having read Brillat-Savarin, I asked for dinner.”

It bears on the title a handwritten contemporary ex-dono : “Small gifts maintain friendships”.