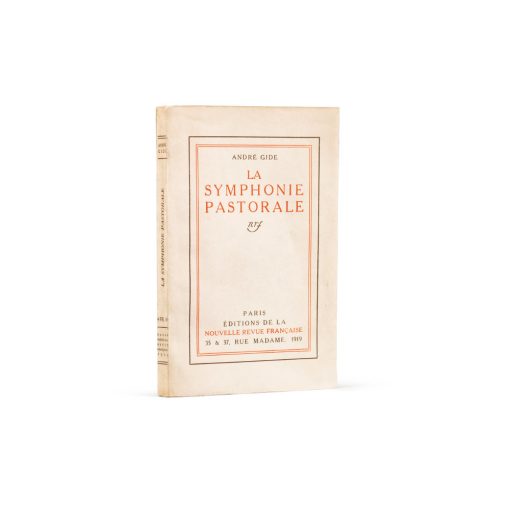 A beautiful copy, preserved in its publisher’s wrappers,
as issued.

This first edition with the correct date is very rare since almost of all of the copies from this print run were destroyed at André Gide’s demand, except for a few copies he kept himself.

Some critics wanted to see in La Symphonie pastorale, L’Immoraliste and La Porte étroite a sort of triptych, each of the books representing a step in Gide’s thought process. The pages of this Symphonie are full of fervor and discoveries. The poetry and the delicate atmosphere that emerge from this novel contribute to the reader’s enchantment which only tends to diminish near the end, when this disconcerting story tumbles into tragedy.

The pastor of a small region in Jura, a delicate and sensitive soul not unlike a saint, keeps a diary. He welcomes into his home a poor orphan, born blind, name Gerturde ; the pastor passionately dedicates himself to her education and guides her on her spiritual path. But in reality, as the child grows, the love of her adoptive father loses its purity ; the pastor, just as incapable of seeing the evil in him as in others, doesn’t notice his feelings, unlike his wife and his son Jacques. Jacques is also in love with Gertrude. He withdraws after having provoked his father’s ire ; the pastor finally sees clearly in his soul but he doesn’t know how to react to Gertrude’s signs of affection. And the idea that the girl could see again after an operation accentuates his uneasiness. The operation is successful and Gertrude comes back to the village. But before arriving at the pastor’s home, she throws herself in the river.

“The pages of this Symphonie are full of fervor and discoveries. The poetry and the delicate atmosphere that emerge from this novel contribute to the reader’s enchantment.” (Dictionnaire des Œuvres)

A beautiful copy of this first edition, preserved in its publisher’s wrappers, as issued.