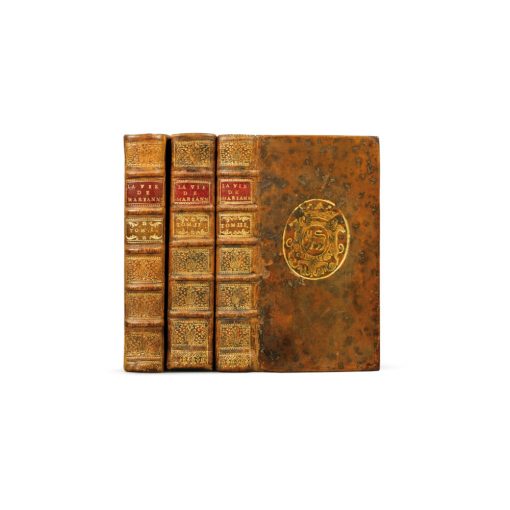 Partly first edition of La Vie de Marianne by Marivaux,
one of the great French novels of the 18th century.

A precious copy in contemporary armorial binding,
from the libraries of the Président Bouhier,
Chartraire de Bourbonne, the abbey of Clairvaux and Jacques Dennery.

“One can only be seized by the author’s prodigious capacity in making his heroine so extraordinarily alive.”

“After La Princesse de Clèves and Manon Lescaut, before Madame Bovary, Marianne is one of the most perfect and interesting heroines of French fiction.

Historically, La Vie de Marianne is of great importance, Marivaux reveals himself to be one of the creators of literary sensibility.” (Dictionnaire de la littérature française)

“La Vie de Marianne was published in twelve parts, from 1731 to 1745. It is extremely difficult to find the 12 parts reunited in first edition.” (Tchemerzine)

This reunion is today extremely rare in contemporary homogeneous binding since the publication was spread out over eleven years.

In this copy, parts III, IV, V, VI and VIII are published for the first time.

A novel of manners, La Vie de Marianne was Marivaux’s first novel. The writer uses the society of his time as the topic of his novel. It is an irreplaceable portrayal of French daily life in the 18th century.

La Vie de Marianne is a great novel. First and foremost because of its psychological depth and vivacity: the character of Marianne is infinitely complex and true.

The portraits present in this novel, the constant analysis of the heroine’s feelings, the stunning modern traits, show us how Marivaux stays here truer to reality than in his plays. That is because La Vie de Marianne is also a novel of manners: Marivaux not only depicts the literary salons and the lives of the great lords, but also the street, the shops, the lives of the little people.

A precious copy preserved in its contemporary binding with the arms of the Président Bouhier (1673-1746).

Born in Dijon in 1673, Jean Bouhier was appointed as an advisor in the same Parlement as his father in January 1693 and became président à mortier in March 1704.

The president Bouhier had a passion for knowledge and dedicated himself to it as soon as his functions allowed him to ; he had acquired a solid reputation as a man of science and erudition and was elected to the Académie française on June 16th, 1727; his successor at the Académie was Voltaire.

Heir to an illustrious family of members of the Parliament of Dijon and of book collectors, the president Bouhier was an experienced bibliophile who read and marked books ; his collection was passed down to his son-in-law, Chartraire de Bourbonne and then to the abbey of Clairvaux.