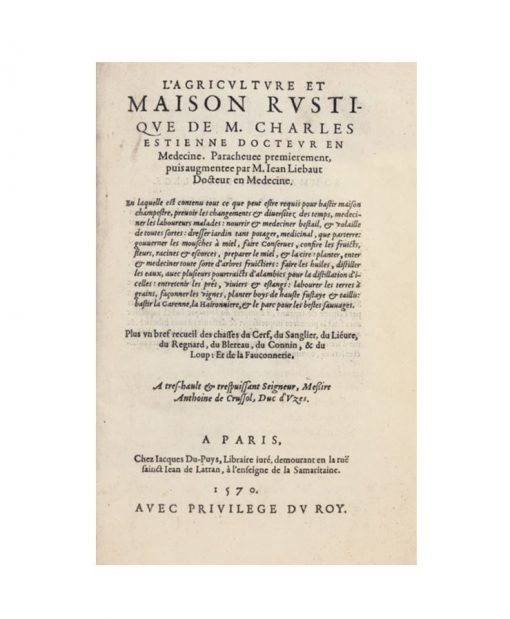 One of the first collective edition reuniting
La Maison rustique by Charles Estienne and La Chasse du Loup by Clamorgan.

Very pure copy, quite rare, preserved in its contemporary binding.

The first book contains some decorated vignettes in the text and the second 14 woodcuts depicting wolf hunts.

La Maison Rustique is first a treaty on agriculture, gardening and domestic medicine.

The collection is divided into 7 books. It mainly treats of the situation of country houses and its outbuildings, its flower gardens, orchards, fields and grounds destined for the culture of grain. The book includes some thoughts on bakery. There are also numerous recipes for jams and fruit preserves.

“Agriculture in all its diversity was for Charles Estienne the topic of many remarkable works, especially considering what was known of natural sciences at the time. The first publication in French was printed in 1564, and more than once, before the 1570 edition came out under the care of Liébault, his son-in-law, with many new additions.” (Renouard)

La Maison Rustique considerably influenced the behaviors of the rural nobles in the 16th century by giving them plenty of theoretical and practical information.

Arents also underlines the importance of this work in the history of tobacco :

“By 1570, tobacco was known to European botanists as a new plant from the Americas endowed with exceptional remedial powers. It was being cultivated in many gardens in Western Europe… But up to this time no full description of the plant had been available. A brief and inaccurate notice of Tobacco appeared in Estienne’s Maison Rustique, 1564, which was corrected and increased by his son-in-law Liébault, in the edition of the following year. It is the latter who is to be credited with the earliest detailed account of the subject, as it appears in this edition of 1570, and who first published the name for tobacco, Nicotiane, by which it was so long known. He had, he says, private information concerning the plant from Jean Nicot himself (its supposed introducer in France), and this honored him.”

This edition is decorated with 6 vignettes in the text, all relating to distillation.

One of the first editions reuniting these two fundamental texts at the same date, after the ones from 1567 et 1569.

La Chasse du loup de Clamorgan follows all of the editions of the Maison Rustique by Charles Estienne since 1570.

14 woodcuts (135 x 107 mm) illustrate the practice and techniques of wolf hunting.
They were first used in the Du Puy edition of 1566.
This text describes the habits of wolves and the different ways to hunt them.