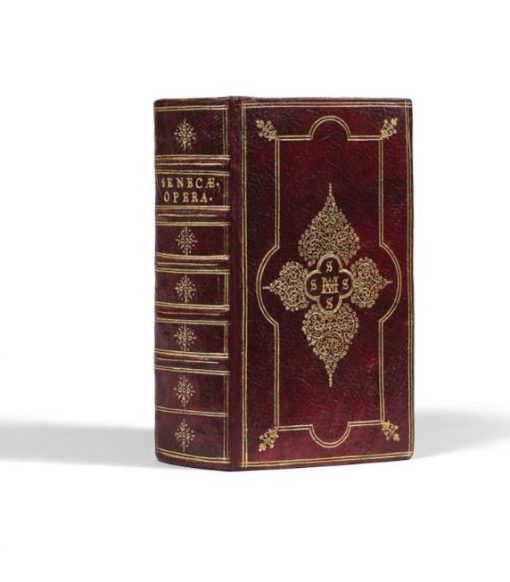 Red morocco, in the center of the covers: quadrifoiled medallion bearing a cipher and four S shapes stamped in gilt, bordered by four sprays of dotted lines in gilt in a frame of straight and curved fillets in gilt with fleurons in gilt in the corners, ribbed spine with gilt fleurons in dotted line, gilt fillet on leading edges, inner gilt dentelle, gilt edges.
Contemporary binding by the workshop of Macé Ruette.

A ruled copy with the cipher of H.-L. Habert de Montmort.

“Macé Ruette (1584-1644) started his binder’s apprenticeship in 1598 with Dominique Salis. In 1606 he opened his own workshop ; from 1629 to 1634 he was administrator of the Confrérie des libraires, imprimeurs et relieurs. On the death of Clovis Eve in 1634, he received the title of “King’s binder”, a charge that passed, upon his death in 1644, onto his son Antoine. His activity seems to have stopped in 1638. He had edited some holy volumes (few, actually) and opened his own bookstore on the street Saint-Jean-de-Latran, near the Fontaine Saint-Benoît.

Up until 1620, the style of the bindings by Macé Ruette was limited to the models of the time: “fanfares”, “diamonds and corner pieces” and “frames à la Duseuil”. It is around 1620 that the young Habert de Montmort (1600-1679) started a collection of Elzeviers he had bound by Ruette as they were being published. This is a known fact, that can be easily checked because we can follow the changes in the decoration tools depending on the dates of the books, whereas the style stayed the same. I have been able to study thirty-five of these small volumes, bearing dates ranging from 1620 to 1634 : from 1620 to 1630 the fleuron in the interior frame is a small vase with flowers; after 1630, it is replaced by a more important spray tool. There are also changes in the inner roll-stamps: a model disappears in 1629, replaced by a second that lasts until 1634, when a third one appears in 1633. Other strange fact: the quality of the morocco also follows an evolution: rough and of reddish-black color in the beginning, it is of a nice smooth grain and color after 1625-1626.

If I spend time on these small volumes and try to ascertain the date of their bindings, it is because they are the first trials of tooled dotted line motifs. Also, timidly, of the “spray” motif, a motif which, in a more elaborate form, would soon hold a very important place in the world of binding for fifty years.

Ruette’s bindings are of very varied styles; in general, he is more successful with smaller formats than with folios especially when he blends full tooling, dotted tooling and branches!” (R. Esmerian)

Henri-Louis Habert, seigneur de Montmort, advisor for the Parlement de Paris (1603-1679) was a friend of Mlle de Gournay and of Gassendi who lived and died at his home and of whom he published six folio volumes, preceded by a Latin preface. A friend and admirer of Descartes, he was an enlightened protector of science and literature. Montmort had his books bound in a binding attributed to Macé Ruette (1584-1638), ordinary binder to the king.

A precious and beautiful copy identical to the six copies of the R. Esmérian collection.