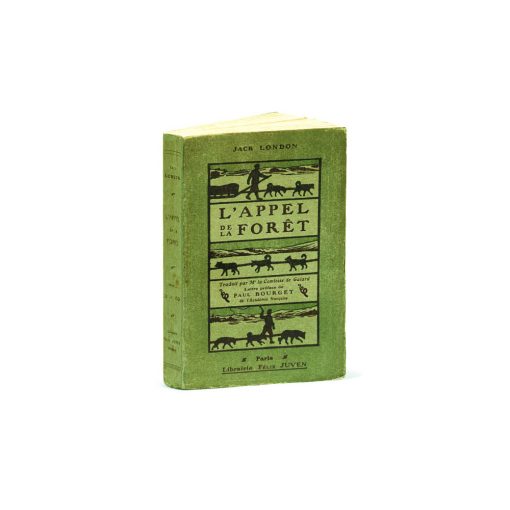 An attractive copy, pure and wide-margined,
preserved in its publisher’s wrappers, as issued.

“One of the first American novels to examine the quest of the pioneering individual who breaks away from the sheltered environment of civilization and is romantically compelled to find freedom in nature. In the early part of the century this was considered the American dream.” (Parker, 16)

“…through the pale moonlight or glimmering borealis, leaping gigantic above his fellows, his great throat a-bellow as he sings a song of the younger world, which is the song of the pack.”

The call of the wolf that ends the novel asserts Buck’s definite return to the wild and the triumph of the superior dog over the beings and things of nature, at the end of a series of cruel experiences with men and beasts. Born on a vast domain where he reigned alone on a sunny Californian valley, Buck is taken at the time of the Gold Rush to Klondike and falls ferociously into the miserable condition of a sleigh-dog. Because of his considerable strength, he manages to survive in the hostile Great North, affirming his dominance over his fellow dogs at the price of bloody battles. He also manages to resist the brutality of his successive owners. But one day, after having been almost beaten to death, he is saved by the prospector John Thornton. Buck will hear with a renewed intensity the call of the wild coming from the depth of space and of time that gives the text its rhythm. It alternates with dream-like moments where he sees himself in the company of a strange half-human creature in an ancient place that he had already perceived in the call of the huskies; he discovers with hunting the taste of blood and fraternizes with a wolf.

Originally imagined as a short-story but worked on for five weeks in a compulsive manner, this short novel met with a resounding worldwide and unexpected success which earned the author, who had no training in writing, to be on the literature program at Berkeley.

In this story, written through the eyes of an animal, a miracle is accomplished: set on preserving the ambiguity of the point of view, the text deploys an intermediary metaphor of man and beast, transcending the pseudo-scientific representation of the laws of natural selection.

Sticking as close to reality as possible, the vision of a phantasmagoric world that is both dangerous and close, terrifying but intimate, where the will to speak is cancelled by what is said, gives this novel its unique quality: it metamorphoses the instinct of preservation into a passion for life and the necessity of desire.

An attractive copy, pure and wide-margined, preserved in its publisher’s wrappers, as issued.

Only one copy is listed in the national and international public institutions: Utah State University, USA.