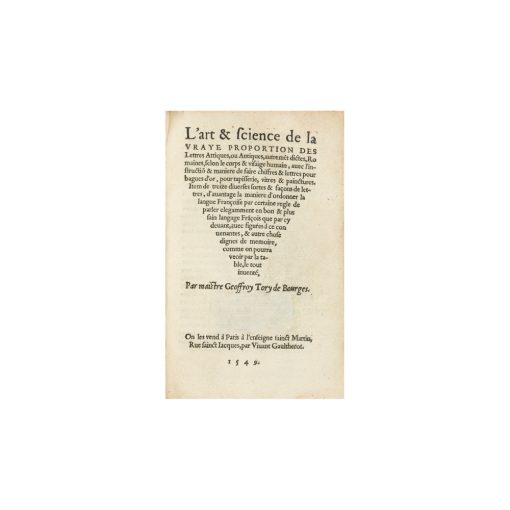 “The result of this work was an immediate and complete revolution

“Second edition published twenty years after the first, very rare and sought-after, of this fantastic book, G. Tory’s masterpiece and one of the most beautiful books of all times. It contains a xylographic reproduction of different alphabets, writings, flowered letters, interlaced numbers and numerous woodcuts.” (Jacques Guérin)

“In many parts of the Continent reflections of Tory’s style flourished for generations. It was the first international style.” (Morison/Day, The Typographic Book 1450-1935, London 1963. S.38)

Considering the vastness of his interests, the variety of his abilities (bookseller, typographer, artist, engraver, philologist and translator), Tory is a perfect representative of the innovative vigor of the humanist spirit. Born in Bourges, in a family of laborers, he first undertakes a university career, exploiting all of the resources from a trip to Italy, before passionately committing himself to a life of book creation in its many forms.

Protée, an editor-bookseller, “rue Saint-Jacques, à l’enseigne du Pot Cassé”, is the first to discourse on his art. “The Champ Fleury is not only a treaty dedicated to typography or the esthetic of books, it is also a manifest, twenty years before Du Bellay’s, whose design is to exalt the merits and the dignity of the French language.” Tory tries to establish a link between the letters and the proportions of the human body (considered as the reference measure of all things). Pacioli and d’Alberti’s treaties inspired this colorful dogmatism. More decisive is his action to take down old gothic alphabets for the benefit of roman characters. In order to do so, he draws alphabets with an elegance never surpassed. One must, he says, “escripre en françois comme François nous sommes” ; derives from this his preoccupation with codifying grammar. He argues for the use of the acute accent, the apostrophe and the cedilla, which his disciples Garamond and Robert Estienne will introduce according to his wishes. His remarks on the phonetics of patois (picard, lyonnais, berrichon, parisien…) contribute to the history of the language and make him a pioneer of dialectology.

“If the Champ Fleury is one of the most famous books of the French Renaissance, it is because it is its visual archetype, seeing as the scholar tried to set up a new architectural concept. This text brilliantly illustrates the expression of an ordonnance which is both balanced and subtle, removed from gothic influences and the tradition of handwritten texts. It is illustrated with about a hundred woodcuts: diagrams, capital letters, thirteen plates of alphabets and models of creative of interlaced letters. For their charm and interest, the most remarkable are the Hercule gaulois, the Triomphe d’Apollon et des muses, and the illustrious emblem “au Pot Cassé” placed in a large Renaissance frame. Jean Perréal and Godefroy le Batave, painters and illuminators working for François Ier, contributed also to the illustration, which cannot be solely attributed to Tory as before. However, he is the one responsible for the printing of the book, which will earn him later on the esteemed title of “Imprimeur du roi”, which François Ier had not yet given to anyone.

In old French, Champ Fleury designates Heaven. The admirable awakener that is Geoffroy Tory invites the reader to this most pleasant garden exploding with greens and where the most precious and strangest flowers grow.” (Ghislaine Quentin)

“It is the first didactic text in French. Geoffroy Tory wants to set the bases of a new French grammar (he defends the use of apostrophes, accents and the cedilla) and set fixed rules for the creation of printing characters. It is under the influence of the Champfleury that gothic letters were abandoned; we must not forget that Garamond was one of Geoffroy Tory’s students.” (Jacques Guérin)

“The defense of the French language, the insistence that it should be used preferably to Latin, take up much space here. Tory tried to simplify, and establish, certain rules of grammar and pronunciation: his truculent notice to the reader, which Rabelais copied in parts in his speech, is about the pronunciation of words by foreigners or provincials. Tory’s text is anterior by more than twenty years, to Du Bellay’s Deffense et Illustration de la Langue françoyse and precedes by ten years François Ier’s edit of Villers-Cotterêts, which made the use of French mandatory in all official State documents. It drew considerable attention and was seen as an original work reflecting an intense artistic preoccupation. Tory’s culture and taste filled the writings linked to his name with a personal and touching style. It is by Tory’s side, and probably due to his influence, that some of the most elegant printers of the time learned their trade, like the perfect Janot, Augereau, Pierre Vidoue and the remarkable Simon de Colines to whom Tory turned to in 1530 to print his Aediloquium.” (Pierre Bérès)

A complete copy, unwashed, preserved in its old vellum; some stains and some tears without loss of text; white paper pieces on the title and repaired printer’s mark, the last 30 leaves are restored in the superior right-hand corner with some loss of letters, a cut without loss of text on the bottom of leaf 21.

The report from the public auctions and catalogues permits us to affirm that the 1549 edition sells for half the price of the 1529 edition, even though it is less rare.

Listed prices of the 1529 edition:

From the library of P.G. Vinckher with ex-libris.