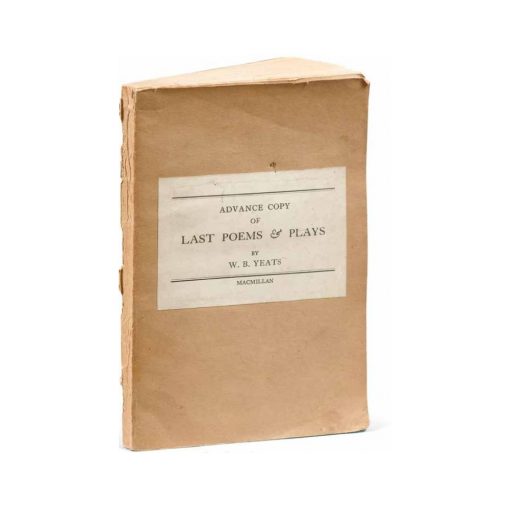 From an Irish protestant family, William Butler Yeats (1865-1939) is one of those poets who elevate their genealogy to the ranks of intimate myth.

While spending time with the old Irish poet O’Leary, Yeats sees the possibility of dedicating himself to the development of an independent national literature.

Until 1901, he spent his life between London and Dublin. He is considered a post-romantic, an esthete influenced by Oscar Wilde.

In 1914, Yeats is recognized as a playwright of the first order and one of the most important poets of his time. But he is no more than that, because his poems truly belong to the 19th century and to the general European movement of affirmation of national literature.

But, at fifty, the most important part of his work is still ahead of him, and all that precedes it seems to have only been in preparation.

The different collections he published after 1919 are all major texts that constitute the uncontested peak of his life’s work.

Always torn between a mythical elsewhere and a passionate love for the most concrete and closest reality, his poetry forever surpasses itself and goes way beyond the author’s political positions.

One of his most beautiful poems, “La désertion des animaux du cirque”, where the poet seems to send to the void all of the symbols he previously used, is probably one of the most commented texts of English literature.

What counts in the eyes of Yeats in his personal journey is not so much the search of an occult truth but more man’s effort to give sense to his life through art.

All that is not internal truth is rejected as being a lie. Yeats’s work is, in this way, definitely anchored in the 20th century and can be placed among the highest exploratory endeavors of the universal subconscious. (Jean-Yves Masson)

“The last years of Yeats’ life were very fecund. Desirous of seeing his work through, he wrote and reviewed with ardor, not only writing poems but also plays like “Purgatoire” and “La Mort de Cuchulain”.

“The Black Tower” is one of the last poems written by W. B. Yeats, on the 21st of January 1939, exactly one week before his death. It is interesting to seize the last poetical moments of one of the greatest poets of the 20th century and to consider the perspective it brings to his whole work. In this case, this enterprise is all the more important because Yeats mostly preoccupied himself with the unity of his work and always revised all of his poems so as to present a finished and united political work. This preoccupation was theoretically justified by the concept of the Unity of Being which Yeats defined at the beginning of the 1920’s and which established as an esthetic law that, in their relationships, the different elements of one’s life work must contribute to the harmony of the whole. The last poems translate this search for a full stop that would close his life’s work in a definitive manner, according to different points of view.

“In 1938, Yeats moved to France, where he wrote some of his best plays, including Purgatory and the poems that would be collected in Last Poems and Plays (1940). This work contains such great poems as “Lapis Lazuli” and “The circus Animals Desertion”.” (F. N. Magill)

This volume is the last major collection of Yeats’s poetry. It forms a substantial gathering of work produced between 1936 and 1939. ‘The Black Tower’ and ‘Cuchulain Comforted’ were written in the last two weeks of his life, the latter forming what Seamus Heaney has called ‘a strange ritual of surrender, a rite of passage from life into death’. Other poems, notably ‘Beautiful Lofty Things’, ‘The Municipal Gallery Revisited’, and ‘The Man and the Echo’, intimate an awareness of death’s approach in their qualities of retrospective summation, while ‘Under Ben Bulben’ offers the text of his epitaph: ‘Cast a cold eye | On life, on death. | Horseman, pass by.’

These and other poems constitute Yeats’s most unequivocal affirmation of the heroic dimensions of modern Irish political history. The plays in the volume were ‘Purgatory’ and ‘The Death of Cuchulain’, both of which sustain the development of Yeats’s dramatic verse in the new freedom and flexibility they exhibit.

A very rare and attractive advance copy of the first printing of Yeats’ Last Poems, kept in its contemporary wrappers, as issued.