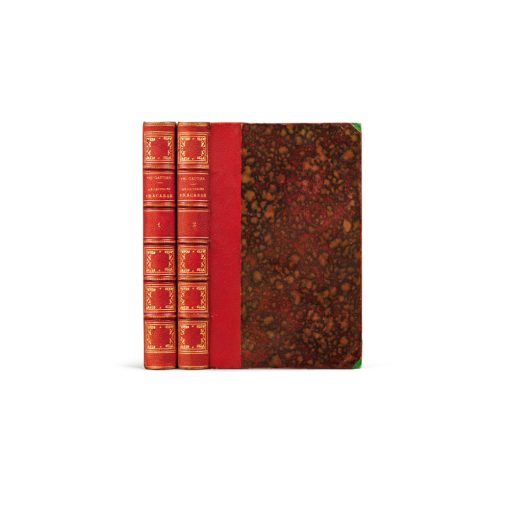 “There are no large papers for this novel, one of Gautier’s masterpieces.” (Carteret)

First the author presents an abandoned castle, in the first half of the 17th century, where the last heir of the Sigognac melancholically lives in poverty with the sole company of a manservant, a wretched nag and a cat. A troupe of nine itinerant actors interrupt his lazy solitude by asking for his hospitality for one night. These strange people, accompanied by four women, with their giddiness, their gracious language, their straight-forward good humor, enchant the baron de Sigognac. They persuade him to joint them, at least to go to Paris where he may seek better fortune. The young man ends up becoming friends with these good people and, when poor Matamore dies, he accepts to replace him, taking the name of Capitaine Fracasse…

It is obvious that this book is loosely based on the Roman comique by Scarron. Again, Théophile Gautier’s best inspiration is of a descriptive nature : he has created a beautiful and colorful series of Louis XIII etchings, just like he had tried to give us a collection of exquisite paintings of the end of the 17th century in Mademoiselle de Maupin.

This book can be considered his best work of prose and the most characteristic of the novels by this colorful writer. (Dictionnaire des Œuvres)

Théophile Gautier is one of the great French writers, one of the most intriguing and prolific : poet, storyteller, novelist, critique and journalist. A supporter of the romantic school at its beginnings, he was to become its head at the end of his life. At any rate, he is its most representative spirit and in that sense had a considerable influence on many writers.

A beautiful copy preserved in its contemporary half-shagreen binding.